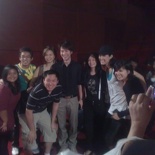 The 30 minute video is largely made by the aim to raise AIDS awareness in Singapore and brought forward by stories from the personal experiences the actors came to know as well, all made possible by Health Promotion Board of Singapore who sponsored a bulk of the production.

All these are part of the “open your heart” awareness campaign initiated by youth volunteers to understand more of AIDS patients as well not to discriminate against them:

“Open Your Heart“, an initiative by a group of youth volunteers who see the need to raise the awareness of HIV/AIDS and its social implications. Through the creative use of a film and a photography exhibition, the campaign hopes to reach out to youth to open their hearts to empathise with people living with HIV/AIDS and realise that we are more susceptible to the disease than we think.

29 August is rather well made and professionally done, way better than the impression people have on stereotypical health awareness videos (like those typical “don’t anyhow poke poke ah!” AIDS/HIV educational video). This one is actually a love story of a couple with one party, the girl “dying” and her last wish of her life to be with her love (Lawrence) after she found out that she had contracted AIDS from another party. Not a bad clip overall and I would recommend anyone to catch it for the cause, the arts you say it! Find out how the story unfolds at Orchard Cineleisure Foyer from 28th March to 30th March. You can also check out these few important time slots on 28th March 2008- 5pm, and for 30th March 2008- 2pm & 3pm.

The premiere trailer clip was posted on Youtube as reassured by the production crew who were there at the event as well. Here is the trailer:

You can view the subsequent trailer here as well.

All these was made possible by 4titude productions and their crew there, National Health Promotion Board and the gathering organized by the kind souls, Ming and Scott of Nuffnang.