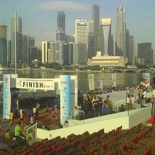 Congratulation to all those who ran and completed he Sheares Bridge Run, Army Half Marathon today. The run is rather enjoyable this year despite challenges with a new venue for the organizing committee, with that I will touch on the various aspects of the race in order:

Pre-Race & Admin
Getting there was not much of a problem due to it’s centralised location. The roads only close from 5am onward but that shouldn’t post much of a problem as most would arrive earlier than that, allowing transports to drop runners as close to the venue. The place was clearly marked with lots of signage which made finding key locations such as baggage deposit and toilet a breeze without much assistance, though the staff there were rather helpful when approached as well.

Baggage deposit was a breeze, though I guess they weren’t quite experienced being army boys volunteers. They even wanted to cable tie my tag with was already masking taped to my bag! Toilet facilities are ample and adequate all with proper water and tissue supplies as well.

There were 100-plus and plain water points lined from the floating platform to the start point, offering runners the luxury of pre-race hydration which came very much a welcome.

The Run Race Route
They opened more lanes on the route this year, with majority of the lanes/fully closed for running. Commendably is the allocation of 1 lane for traffic on the Sheares bridge (contrary to one lane for runners last year) making not only running more spacious, open and enjoyable but allow breezy overtaking as well. There were few bottlenecks upon approaching east coast park where everyone have to squeeze to run on the concrete pavement and the U-turn point prior to the chip scanning area.

Most of the running route was flat and I believe no runners have to put up with pesky traffic lights like last year, giving runners a smooth uninterrupted run. Notable water points have to be the “pirates” of CSS and their spray mist stations, very good indeed, few of the water points which kept the supply of 100-plus at the end.

I believe many mistakened the 6km end point for the 21km end point and sped up until being greeted by a left turn flanked by 21km directional arrow signage. Once running to the front of the floating platform there were also 2 gantries in sight, the organisers should only have one up or at least put the official gun timer on the end point gantry to distinguish and not only to find out that you’ve ended when you see the end point championship mat. 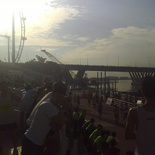 Post Race
Noticeably is the floating platform being out of bounds to the public due the wakeboarding champion even going on. But I just felt that the floating platform and spectator stand, though spacious was not adequate for the crowds which are expected to assemble there. Around 9am onward the place is all lined with queues snaking everywhere for baggage collection, whats more the end point and holding pens of the half marathon is rather small cramped and confined. I caught a glimpse of a person being evacuated in a stretcher by medics and they were having a hard time getting through the crowds who also have no other way to disperse, being held in the pen. The organizers should devote a large open space for runners to site down and do their cool down stretches as well.

There were plenty of ice cold 100-plus left after the race, except for those I heard who finished sub 3hours, there were none left.

Unheard were the goodie bag collection which turns out to be a plastic bag containing few tidbits, a writing pad and some flyers/vouchers being distributed randomly to anyone who comes by.

Baggage Collection
Looks like the organisers really learnt from the rather efficient baggage collection technique from last year, employing the similar compartment styled sorting of bags, but not quite as effective though.

The “deposit points” suddenly turned into “collection points” with paper pasted over the number allocation signage. Many runners could not tell whether the queue they were queuing for is the same one they deposited until trying to make out the numbers or recall the booth.

My bag took 12 mins to arrive after providing them my bib number. 12mins is not exactly long but neither too short for comfort either. Commendable are the army boys who after saw a group of us waiting for longer than usual, resent the our bag numbers in a priority queue (labeled interestingly with 3 exclamation marks!!! behind out tag number). At least I can see the effort played on their part, I seriously see those working behind the camo nets the weak link in the baggage process, they just take too long to find the required bags- not seen by public can slack ah recruit?

For those who completed before 8am, baggage collection will be much of a breeze, but you won’t agree to it if you’ve collected your bag from 9am onwards- with queues snaking all round the area, heard some even waited 45mins for their bags. Unacceptable.

Once again these all added to the congestion within the carnival area, it’s simply discourages waking around the area. I still prefer the open air carnival atmosphere of the Padang.

Not a bad event overall. Especially taking in consideration space restrictions and the first time organising in a new environment. Could actually score better for an excellent route and water point support, but seriously let down by the baggage collection, lack of space and uncondusive ending carnival area.

Last but not least, sincere condolences going to the army CPT Ho Si Qiu (25 years old army regular). Who passed away after collapsing upon finishing his race today.