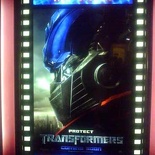 Hadn’t had time to talk about transformers the movie which I caught previously on free passes (yea) funny that the movie didn’t follow the old child hood memories I had on Optimus (flat front prime mover?), Megatron (walter giant cannon?) and Bubblebee (VW bettle) or just because of their scanner’s they can turn into anything they want? Or is it just going in line with how hollywood “spices” things up like Jurassic park, Spiderman, or UK’s Harry potter, it’s always difficult to follow a fixed storyline to please the modern movie crowd these days.

Well, besides comic/print adaptations like those from Marvel and J.K Rowling, I guess it’s the trend this days to put your buck on something with a proven fan base and successful storyline, rather than coming out with something orignal, which can be rather comical, laughable at times (e.g we have “Snakes on a Plane”, killer “Black Sheep” now, what’s next? “Attack of the Radioactive Amoeba?”). Besides sequels (e.g. Die Hard 4.0, Rush Hour) I hope this won’t spoil the drive to introduce in and original movies in the future. Though some old cartoons are also worth recreating on the big screen.

Old Cartoons of the yesteryear that deserve Movies

Other memorable movies have to be disney ones, like ducktales, darkwing duck, goof troop, gummy bears and talespin, which I believe disney themselves has put many into movies already.

😉 Last but not least, Semester exams are in around in a month’s time, so blogging will be a little slow these weeks, till then, it’s the books I will have to catch up on. Cheers!

The freedom of wheels