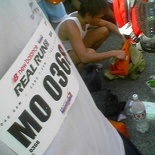 It had been sometime since I woke up to the morning darkness, but today is an exception as the long awaited New Balance Real Run 2005 is on this morning!

Had the “econo” Beehoon Horfun + egg for breakfast at Redhill market with dad (who had to go to the market for some groceries) before meeting the group harbour front MRT control station. & man was the place already packed with people, even the MRT staff were puzzledly amazed- an obvious sign of quite a major event.

The starting & finishing points are at the sentosa gateway carpark- whats left of the late dusfunct fantasy island water park. The race started off @ 8.30 with the juniors (5.5km), followed 15mins later with the open, hometeam & veteran categories (10km). Overall the race was great I just simply love the feeling of overtaking people on the various upslopes & downslopes- places where people tend to slow down, not to mention the notorious beach run. I always maintained by pace & only overtake, not to be overtaken. Furthermore I devised a method of running diagonally along the coastal path so you end up going straight along the coast without slipping down the beach, thus allowing me to overtake an exceptional number of people too on the sand run. Amazingly too, alot started walking after the sands, allowing my team & me to gain an edge too.

The most exciting part is definitely the last 400m where the everybody’s pace & spirits are up towards the last dash. Finished crossing the finishing gantry with twin funky “hang loose style” (aloha in Hawaii). The gantry read 58mins 24s when I crossed it, so minus-ing the 3-4mins time taken to flag off the crowd I guess my timings around the + – 55mins range for 10km. Only when the results to be released in 2 days will speak the eventual actual timing.

The most disappointing part is the lucky draw at the end, where they decide halfway to donate the prices to charity when they are no takers for prices, a call by the orgainisers, but a definite let down by the geering crowd. All in hand 100 prizes given out, neither any of us got an lucky draw prices.. sad, maybe the lottery is easier to win…

& now I got an additional dry-tec event shirt & shoe bag!

Sorry for the lack of event photos as I was a competitor & didn’t take much pictures, especially the crowds at the starting. Out!

Shaun - Sunday, January 3, 2021
Shashlik Restaurant is one serving Russian cuisine. It is inconspicuously tucked on the upper 6th floor of Far East shopping center. It is not...