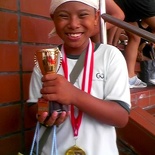 Its a nice sunny day for a biathlon. Met up with ahlong & the rest of the Track members at food court 5 before preping ourselves for the event ahead… 80 over people participated in the biathlon which made out 23 teams, divided into 2 groups (leagues). Where the first league (comprising of the 1st 12 teams) will compete 1st, followed by the remainder in the 2nd league thereafter. Overall timings for both the 400m swim & 3.3km run would determine the placings & winners.

Teams are made out of 4 people each, each too having a disabled member within the team. The 400m swim is primarily for the abled-bodied people as most of the disabled particupants are unable to swim. The run is the interesting part where we have to stick together thoughout the 3.3km run & no team member is supposed to be more than 4m apart from each other, exceeding would lead to a disqualification. Furthermore team timings will only stop when the last team member crosses the finishing line. My team, Team 03 initially we finished 3rd in our league, with high hopes of getting a top 3 placing overall, but later was pushed back due to better timings achieved from teams in the 2nd league. Overall we have of “disabled” member Safiy to thank. Personally being a young 11 year old, its quite a feat for him to run 3.3km with us. We got 9th position overall, with medals & goodie bags for everyone. Our team trophy goes into the hands of Safiy to keep & treasure, our man of the team. 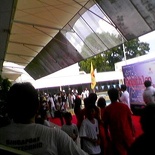 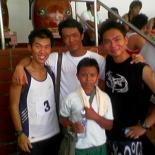 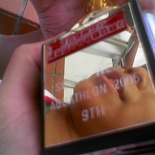 Track & field overall cringed various top 10 positions, including 2nd place, not bad overall. Coach should be proud of us. Cheers to Issac our siao-on regular infantry officer, who just can’t stop pitying himself for being “very old or the oldest” in the team, otherwise he’s a good motivator for the team: “Pain is temporarily, Glory is forever!” (pictured left in group pic) Chun Boon our undergrad (center, top in group pic) who, together with me kept pushing Safiy throughout the run, trying to make the run fun & enjoyable by occasional playing “catch” with him during the run to speed him up. & lastly Safiy (center. bottom on group pic) our MVP! you all rock!!