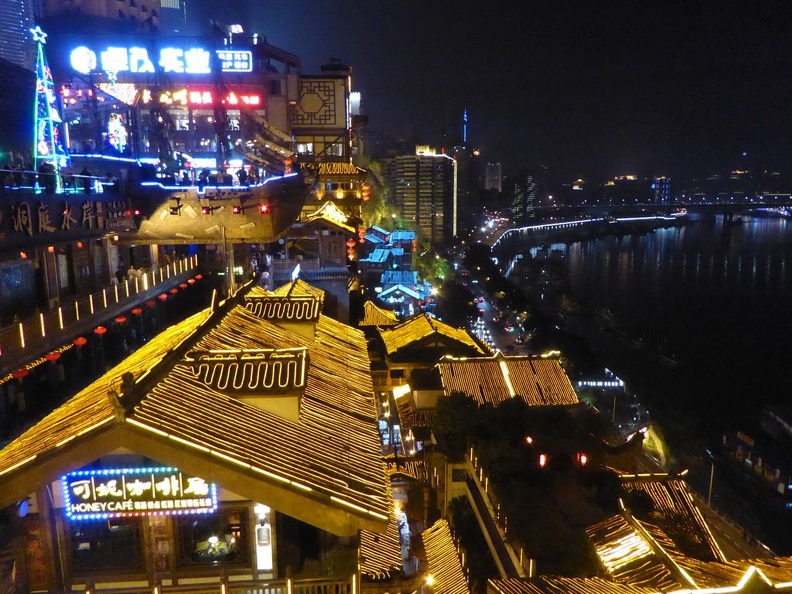 Chong Qing (重庆) is a large major city in Sichuan Province of Southwest China, and the most populous Chinese municipality. The city got its name in 1189 during the Southern Song Dynasty from Prince Zhao Dun. It is one of the five national central cities in China in-addition to Beijing, Shanghai, Tianjin, and is one of China’s four direct-controlled municipalities of the Republic of China administration within inland China. You may also know the city as abbreviated by “Yu” is derived from the old name of a part of the Jialing River, which runs through the northern part of central Chongqing and feeds as a tributary into the Yangtze River, as such the city also a major cruise center for ships departing on cruises along the Yanzte river. 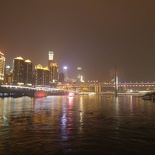 Chongqing city from the Yangzte 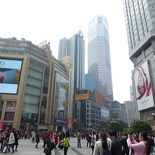 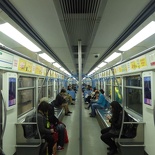 The City and Shopping
Chong Qing is a busy city, with a population of 30M, with 18M living within the urban city area. You can see it on the crowded streets of the city with crowds everywhere- on the train, city and streets. The city is well connected by a monorail metro train system which runs both overground and underground over 6 lines and is also connected to the city’s international airport. A metro trip generally costs about 5-7 yuan depending on your travel distance. Having said that, there is never a dull or quiet moment here in Chong Qing city. The Chinese love shopping, and known worldwide for their spending habits. The area just off Xiao Shen Zi or Ling Jiang Men metro station in the Yuzhong district is Chong Qing’s commercial, financial district as well one of their main shopping districts. 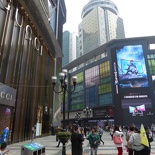 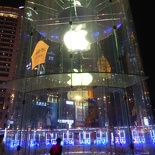 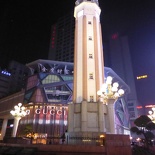 The shopping district are huge to compliment the city’s populous reputation. Here, at Pedestrian street you can find many shopping malls and big-brands boutiques such as LV, Gucci to name a few. There is even a large official Apple store here. Chongqing also served as China’s wartime capital during the Second Sino-Japanese War when Beijing was taken over by the Japanese. A central people liberation monument sits in this large pedestrian shopping plaza in Jie Fang bei square to commemorate the liberation of the Japanese from the city.

Foods and nightlife
There are plenty of nice cheap and good foods in Chengdu. In traditional Sichuan fashion, foods delicacies are generally spicy and served with chilli/mala (dried chilli pepper spices). As such traditional Sichuan dishes such as Mala hotpot are very popular here and the locals do have quite a knack for very spicy food, not for the faint of heart!

Ciqikou market
If you prefer a more traditional street setting for food and shopping, a must-see area is the Ciqikou day market (just off Ciqikou metro station). Street markets are always an in-thing in Asia and it is no different here with always lots to see and buy at a bargain. The market sits on an ancient town, operating till today with a blend of old and new architecture. It is huge with large number of stores selling wares from different trades. You get traditional shops hawking street food to restaurants offering sit-down meals. Things of interest here are fried dough fritters which are popular with the locals, with long queues a good indicator of popularity. You can get pretty good prices for wares here, just remember to bargain/haggle for lower prices. 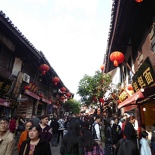 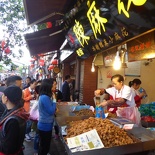 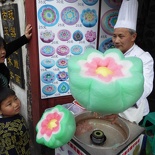 After a while the good sold are pretty much the same- pre-packed dried foods, and souvenir clay toys. If you have a sharp eye, you can look out for a small number of privately owned stores selling unique hand made goods, such as toys. There is even an alley way devoted to hang-out at speciality western-style chill-out cafes. 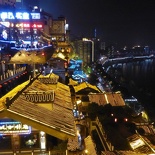 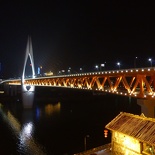 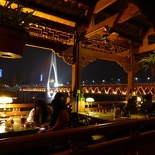 Hong Ya cave
A nice gem to visit at night will be Hong ya cave in the Chao Tian Men area. It is not actually a cave, but what the Chinese will call a village-style collection of huts. It is located a short walk just off Xiao Shen Zi metro station too. The site is essentially a night chill out area built over a span of over 8 eight floors comprising of pubs, restaurants which gets busy after sunset. It comprises of a mix of old classical Chinese hut buildings perched on top of a hill facing the Jialing River and overlooking the Qiansimen Bridge. Hong Ya cave is a beautiful place, and the views from the hill top with the yellow-lit roof tops are magnificent too. The shop, restaurants and exteriors lights in the area generally shuts off after 10.30pm.
If you are looking for a modern Chinese city yet retaining much of its traditional feel compared to other modern cities in China, yet not too expensive to stay in, Chong Qing is definitely one of the few cities to have on your visit list.

View more photos of Chong Qing in these photo galleries: