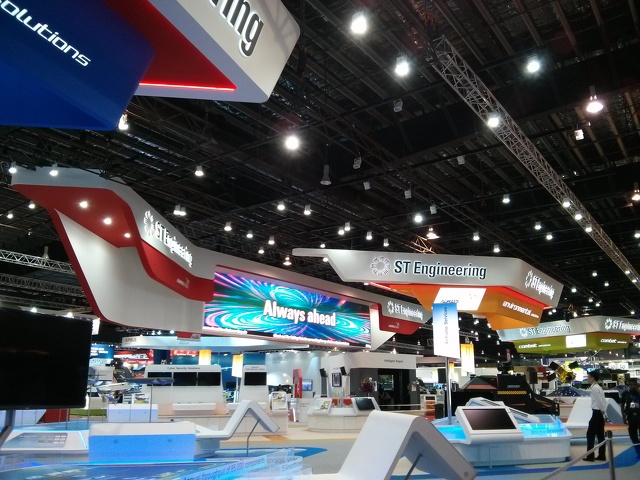 The 2014 Airshow this year is held at the Changi exhibition center, which was built as a one stop aviation display hub north of Changi Airport and just off Changi coast road. You will be able to get to the exhibition center directly with a car pass or taxi where a $10 surcharge will apply on the outbound journey from changi exhibition center itself and not to the show venue itself. Alternatively, those who purchase regular day tickets can find more parking lots at Singapore Expo and take the free shuttle from Expo hall 7 itself direct to the show venue. Doing so will allow you to be screened at the Expo itself allowing you to bypass the screening at the venue, which this case is reserved for visitors arriving directly at the exhibition center itself.

General exhibits
Upon entering front of the hall, you will be greeted by ST Kinetics display, always taking the center stage in the air show main pavilion with a booth area even dwarfing that of Airbus and Boeing alike. Despite them being an Airshow a major sponsor of the air show, ST pretty much spared no expense in showcasing literally most of their portfolio of products like a marketing dump, laughably with a strikingly large number of exhibits not actually related to aerospace at all.

With the exception of the bigger exhibitors like Rolls Royce, AirBus and COMAC (commercial aircraft corporation of china) featuring a variety of aircraft on display, the indoor exhibition area is separated by regions, with each sector dedicated to aerospace or defense companies originating from that particular region.

The exhibition areas are themed largely to regions, with the American and Israel regions being the most prominent exhibitors in the show. Companies to look out for here will include Boeing, Bell to IAI, IMI and Rafael.

Lasughable, both the “United” companies have their booths right next to each other, with United Technologies with their range of sister companies such as Pratt and Whitney, sikorsky etc right next to United Aircraft Corporation (Sukhoi).

While Boeing and Airbus has booths within the exhibition area accessible by the public, the outdoor chalet areas are closed invitation-only and trade visitor only areas, notable aerospace and defense technology companies will include Northrop Grumman and Lockheed martin, with the latter having an F-35 mock up on display for public viewing.

Simulators within the exhibition area on display includes a Dreamliner (787) a Cobra (Bell AH-1) all running completely off PC-based flight simulators. You can also find a full cockpit mock up of the new A350 complete with the digital cockpit at the Airbus booth. You can explore the A350 on the outdoor display areas. You can expect very long queues while waiting to have a go at these simulators on public days. But they are not as busy on the trade show days.

Commercial aircraft out here comprise of mainly a variety single engine piston driven propeller leisure craft (synonymous to Cessna planes), a combination jet propelled private aircraft such as Gulfstream private jets as well as a static display of modern commercial passenger planes such as a 787 by Qatar and the A350. Notable military aircraft include the F15-SG which recently obtained operational status. Ground-based vehicles will include a variety of air-defense systems like the Rapier and Spyder missile system sprawled across the open area, which can be rather scorching on a mid-afternoon.

In addition to teh 45 years of RSAF open air display, there is a large air conditioned tentage at the far end of the open air display area featuring exhibits, try-out and multimedia. The RSAF staff members were all very polite and professional in elaborating to the public if they have any queries. The tentage here is where the Black Knights aerial performance team will sign autographs after about 2 hours every aerial display session.

The US has a number of military planes on display too, such as the F-35 JSF, KC-135 strato tanker, Osprey and C-17, where you will be able to catch the latter in the aerial displays. Have any questions on the air platforms too? The crew on board happy to take questions and explain to trade visitors any aspects of the plane.

The C-17 Globemaster III is essentially a more heavy lift version of the old C-130, with 4 by-pass Pratt & Whitney F117-PW-100 turbo-fan engines in place of turbo-props on the C-170. It can carry a larger payload of about 77 tons too.

Admin areas
The show indoor areas are excellent areas to hide from the heat, but there are little or no seating areas, especially around the hall entrances, where most people will loiter about. There are ample toilets but no water fountains (the tap water is drinkable). Food is generally expensive here. Heading out for lunch means having to go through queues and security again, which can take up to 2 hours. So, most visitors here are petty much stuck on the premises itself. You are advised to bring your own water and light packed lunches as cafeteria food is generally very expensive here, a can of coke costs $2 from the vending and simple meals (nasi lemak, bee hoon, etc) and taco wraps starts from $6-8 onwards

That’s all for the intro of the event many can expect for this weekend. See you there!