Home Sports & Runs The days after the marathon 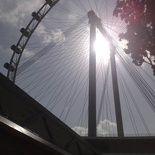 Was around the esplanade area yesterday, I never thought that I would myself back at the hot spot so soon as I was very much recovered and walking around normally. The area was left very much in the shadow of the big event the day before, with barricades still lined all round the roads, alone excavator doing roadworks in the park and empty tents left bare and to be stripped by the contractors around the area. A contrast to the bustle before.

Reading on the post marathon report on the papers, it seems that our defending champion, Amos Tirop Matui (Bib No.1) from Kenya was a bit disappointed with an alleged group that blocked him around the 36km mark, widening the gap between him and the leaders of the race. It was also around that distance where his very own pacer, Elijah Mbogo felt that he could push on and finish remainder of the race, completing in a record 2.14.23 and a full 2 seconds ahead of his teammate at 2.14.25.

As the rules allows, Elijah was a fully registered participant and is fully liable to be paid the full winning sum of $25,000 despite his pacer role in the race. Amos didn’t lose sorely as well, despite being the the favorite saying he will claim his title back next year, taking back the 2nd $15,000 prize money. As it goes, unlike in Formula 1 there can always be the winners where we least expect it, or let be the underdog like Elijah who initially saw himself as no-one but just a pacer in his homeland, well that didn’t stop him from winning his second lifetime marathon 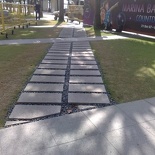 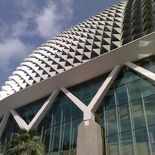 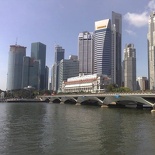 Anyway back to this entry, being out at the event area again was also a good time to fully test my N95 8GB with the scenery around the area, with some neat shots and at the same time recap some of the happenings which I left out in my previous marathon race report. Anyone remember the stoned pavement nearing the finish just before the esplanade bridge underpass? I think that was one of the biggest hazards having to run on, your feet can be caught the stones or you can risk and ankle sprain there. The rubber mats covering the tiled pavements didn’t fully cover them all at well, as elaborated in the photo above.