In the light of the Mid Autumn festival going on now, noticeably would be the array of nicely made lights and translucent lantern display on along Chinatown and the Singapore river by the River Walk (specifically opposite the Clark Quay on the Central Shopping Center side). Personally in the light of the rather high standards and taste we people have now in the age of special effects, light an magic, lasers, wide theater screens and booming stage speakers to name a few, I would see myself to spoilt an extent of not even turning an eye to these primitive lantern displays.

However, upon looking closer and paying attention to details, you will notice that there is more to just lanterns but a whole array of Chinese traditions and history which paints to what we are today – Our almost long lost traditions and culture revived in the heart of the Singapore River. 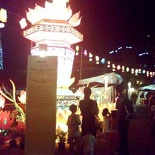 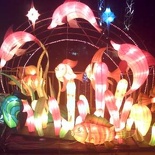 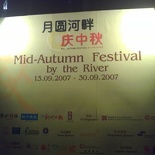 After all these are the bread & butter, the very basics which ties us down to our cultural roots in this age of bustle given globalisation and rapid westernization. Given the exceptional traditional or culturist, I see that most modern generations these days won’t find street wayangs and puppet shows as irresistible as their Xbox of Playstation, contrary to that by our grandparents who always never cease to amaze them of how boring they can be.

In that limelight, it undeniable that such street performances are slowly dying, given resistance from the young to take on from their parents, slowing finding these props locked off the hands of aged-seasoned veteran hands, and only luminated by museum displays spotlights contrary to that of the stage glory days.

However, it’s still hearty to know that steps are still taken by the current community to showcase the traditions, given this Singapore River display for instance. And do lanterns now had kept up with the times – I remembered going all around for lantern social gatherings with my parents when I was a young kid, then there is always those large group night lantern walks in the night through neighborhoods with our lanterns. Most kids will have the traditional candle lit paper lanterns while those who prefer the edge will have the battery operated ones with the occasional music to boot. Lanterns these days not only have light, sound and blinking LEDs, they even have moving parts, wings and fans driven by motors! Now that’s cultural technology!

Check out the displays at the Chinese garden as well, the display is definitely a must see and is supplementary to that along the Singapore river. After all, no matter how thin these lanterns can be physically, deep inside is a rock solid tradition which only time can tell, will stand up to the elements and the test of time.