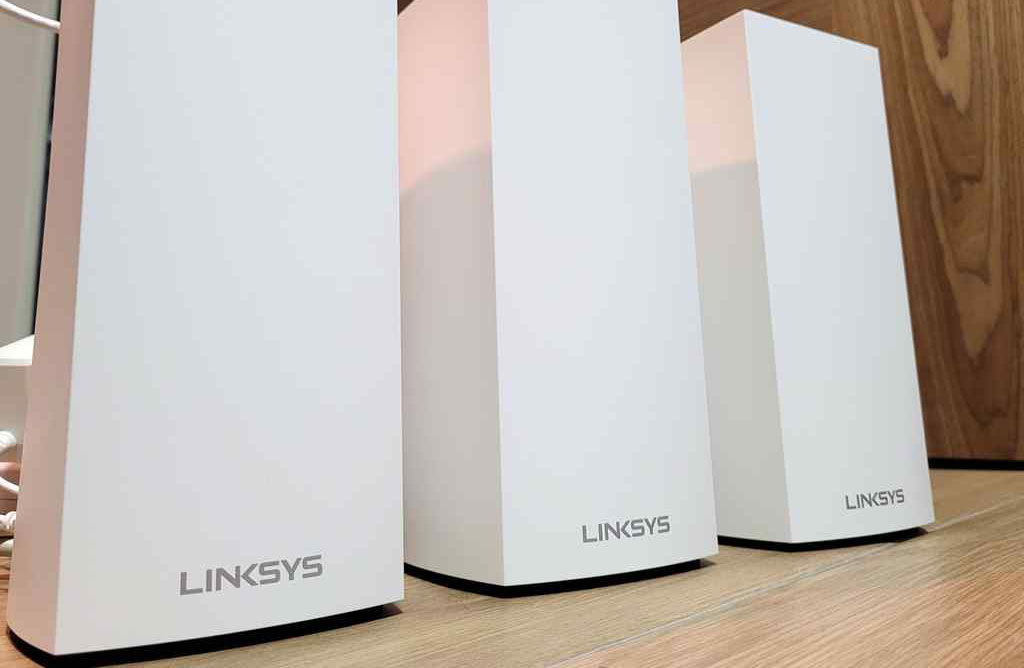 Lets check out Linksys new Velop MX4200 Tri-Band Mesh WiFi 6 System today with an in-depth benchmark review. The Linksys MX4200 Router is a smart one, with the ability to extend its reach within your home via additional of accompanying multiple “Mesh” units. Lets see what’s on offer.

At first impressions the MX4200 has a sleek modern external design. It is not-intrusive and does not stick up like a thumb. Though it is nothing home to scream home about in the design department. Visually, it goes well in your home deco on a table or a book shelf as a modern connected device.

Check out the MX4200 with an unboxing and first impressions video below.

Also, the device has 3 gigabit LAN ports, a single gigabit WAN, a USB3 port tucked in the rear, and a DC inlet jack with its own included power adapter.

We first saw the Linksys MX4200 router through Starhub’s exclusive partnership with Linsksys, where you can get the mesh router bundled with Starhub’s home fiber internet plans. Moreover, you can purchase the router through regular retail channels too. Also, one unit cost S$399 (~ US$249.99), while the Velop MX8400 (2pack) costs S$799. It is a much better value offering than the previous Linksys MX10 Velop AX.

Additionally, the three pack we see here (MX12600) in the review will set you back in the S$1099 range. All variants comes with a 3 year warranty. Notably, these both value packs  are available at Challenger and their online store hachi.tech only, with Challenger ValueClub members eligible for promo discounts on the MX8400 and MX12600 at time of writing.

Additionally, out of the box, each router comes with an auto sensing 100-240v wall adapter delivering 12v up to 3 amps, 36W charger. On my power wattage consumption measurements, a Single MX4200 Access point (AP) consumes 10.3 Watts from the wall in use. 2 units AP in mesh mode consumes up to 18.5W, and up to 29.5W with 3 AP mesh units. Also, the MX4200 is cross-compatible with other Linksys products like the MX5300, which you can use to compliment and extend your existing network (including Wi-Fi 5 networks).

So, what exactly is WiFi 6? WiFi 6 (802.11ax) is the Wi-fi alliance latest incarnation of the wireless standard we synonymous with everyday connected-life. Terms like Wi-fi 802.11 may ring a bell or two, but there are differing standards with each iteration, with fast speeds offered with newer generations. Having said that, the newest WiFi 6 is capable of a theoretical maximum throughput speed up to 9.6Gbps. 9.6Gbps allows you to transfer a 1GB file in under a second. This is an improvement compared to 3.5 Gbps on WiFi 5 and up to 600Mbps on WiFi 4.

I found the setup easy and painless. It is done through the web GUI interface on your browser (192.168.1.1), or the Linksys mobile app you can grab on your mobile from the App store for both iOS and Android phones. The startup wizards sets you up on your basic core network parameters, such as your passwords and Wireless SSIDs.

To join a new AP to your network, you just simply turn on your device and it goes automatically into “pairing mode”. The router’s single indicator LED at the top pulses blue and turns purple during setup mode and goes blue-steady when connected and well.

Also, the setup is automatically done through a one-click (literally) wizard. Gone is the need to manually join a router manually to your LAN, de-conflict IPs and SSIDs. New meshes automatically reads your network settings and re-broadcast on your same pre-configured SSIDs.

Using the on-board speed test, the router was able to achieve sub-940Mbps bidirectional, or within 6%-ish on a gigabit connection through internet WAN from a 1Gbps fiber internet backbone. This sets the basis for subsequent speed tests to come. 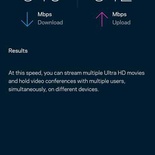 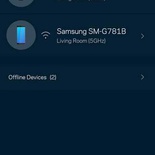 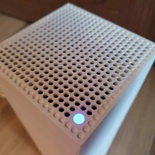 However, despite being one-touch, the initial setup does take some time (up to 10 minutes per device on average). On some occasions, I had re-try the router setup about 2-3 times before it eventually connected. Despite this, the process was largely painless and great for non-technical folks. There is also WPS one-touch setup too as an option.

Also, we start to see these mobile management apps being the norm in the industry. It is similar to what we saw in the D-link D-Fend router previously, as well as Ubiquiti line of Uni-fi products.

On the cyber security end, the MX4200 offers a simple rule-based Stateful Packet Inspection (SPI) via firewall rules. However, there is no deep packet inspection, which is expected of the MX4200 price range. This is despite the industry starting to see these features introduced into home routers, like those we see by Ubiquiti with their Dream machine routers.

Also, an accurate test-case for Wi-fi AX speeds is peer to peer on LAN. Say, if you have a home entertainment PC/NAS with an AX Wi-fi 6 adapter. Also, a directly-connected USB 3.1 Gen-1 SSD (5Gbps ~625MB/s) to the router’s USB port theoretically allows you to serve data within the advertised 1.2- 2.5Gbps AX range without bottlenecks. This allows you to truly maximise the main selling point of the Linksys MX4200 router Wi-fi AX capabilities.

The chart below shows the maximum wireless LAN speeds with respect to distance from the AP. Ranging from 1meter range (beside the AP), to 3m, 5m and 15 meter distances. This is done in single, 2 AP and 3 AP mesh configurations allowing me to scatter the nodes around my test venue to find the best wireless performance. 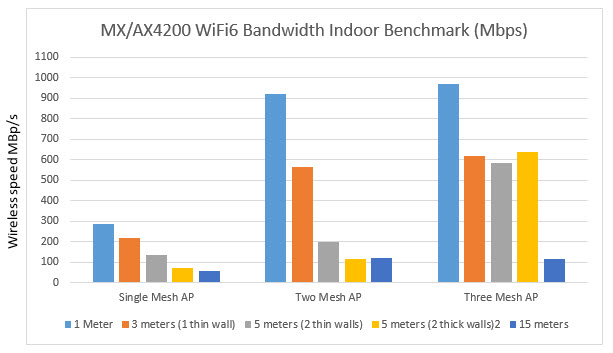 Also, my Wi-Fi 6 tests yielded a peak wireless LAN transfer rate of 971.31Mbps. This corresponds to a commendable sustained actual file data transfer speed of 97.86-108.67MB/s. Notably, these speeds are very close to a wired gigabit connection, making it a ideal wired replacement. Also, do note this ideal-case benchmark conducted on peer to peer Wi-fi 6 AX devices on LAN right beside the router, and is not dependent on internet WAN speeds.

Realistic maximum speeds on Wi-Fi 6 to Wi-Fi 6 device transfer are in the range of 640Mbps. With 3 APs, I was able to achieve sustained sub-600Mbps speeds 5 meters away even in demanding environments with lots of concrete wall attenuation and indoor reflections.

Network speed tapers sharply with 2 AP past 5 meters, and from 15 meters in 3 AP mesh to a low sub-100Mbps when you are over 15 meters away. This due to the attenuation on indoor “noisy” surfaces and concrete rebar you get on ultra high frequency 5Ghz band.

From the results, the MX4200 is a fine example of maturing Wi-FI standards offering an alternative to wired gigabit internet. We had come a long way with 54Mbps Wireless-G on the Linksys WRT54G days to Wireless N, B, AC and the current AX. Though Wi-Fi6 might offer slightly faster speeds than WiFi 5, WiFi 6 is more likely to maintain top speeds in busier environments.

Interestingly, I found that in single AP mode, the router has a tendency to run in 802.11AC mode with real speeds up to 300Mbps. I half suspect that in Single mesh mode, the router is running in AX 2.4Ghz, which caps the speeds up in the theoretical 600Mbps range.

However, adding a second AX4200 to the mix pushes the base measured network speeds up to 971.31Mbps, which is the 5Ghz performance range (theoretically up to 2400Mbps). This corresponds with a sustained download speed of 97.86-108.67MB/s- as fast a wired gigabit ethernet.

Despite much tweaking and optimizing my network, I was not able to hit the advertised ‘theoretical magical’ 2,400Mbps speeds, even half that on a 3 node AP mesh setup. A quick check with Linksys verified that my sub-970Mbps AX speeds are indeed a realistic wireless speed on 5GHz-2 AX, where real speeds are actually half the theoretical value.

Having said that, going past the 15 meter mark does push the limited of what attenuation have on the ultra-high frequency 5Ghz spectrum. This is so especially indoor where performance greatly tapers to a crawl of 12-14Mb/s LAN and internet transfer rates.

Additionally, from my tests, I found that router location is the biggest factor affecting bandwidth performance. In an indoor environment, the router is more location-sensitive than wireless standard or band-type. I found a “star” layout between nodes offers the best LAN speed performance.

Also, with a multi-AP overlapping mesh setup, your wireless client device may not automatically switch to the fastest AP. This is what I call “overlap confusion”. It happens if your the existing, but slower connected AP still have a reasonable quality of service which your device will remain connected to despite having another stronger AP present. Unless you force a re-connection to the strongest connection available in the room, you may not get the best wireless performance if your Access Points have too much overlap.

Hence, I was able to draw four conclusions for the test:

Also, as devices gets faster, and to fully utilise the AX 2,400Mbps speeds, it would be sensible for Linksys to consider 2.5G ports Ethernet connectivity for their future routers, instead of the gigabit WAN and LAN ports. Otherwise, your internet speeds on the MX4200 would be bottlenecked up to a maximum of 1GBps. Alternatively, the next incremental innovation I would love to see is to introduce the option of link aggregation through dual-WAN, to rectify this bottleneck.

Still, the MX4200 with a 3 AP setup offers a compelling setup which truly allows you to replace physical Ethernet wired cabling. However, all your connected devices (phone, laptop) need to be on the Wi-Fi 6 ecosystem to reap its benefits. Also, most home consumer devices these days still mostly utilises older wireless versions and gigabit Ethernet (e.g. Home NASes and desktops).

Though 2Gbps residential fiber had been on offer for years (such as those offered by Singtel, Starhub and Viewquest), this is usually bottle necked, and delivered via two separate 1Gbps lines via gigabit-only ISP ONT equipment/routers and not via a single 2Gbps pipe to your client end-point. Hence you won’t be expecting true-2Gbps surfing speeds anytime soon. Until 2.5Gbps ISP ONTs infrastructure is mainstream for residential fiber, Singapore 2Gbps home fiber plans today is still tad a gimmick.

All in all, the Linksys MX4200 offers solid future-proof home networking device at an affordable price point. It’s AX wireless performance is a viable alternative to wiring up your home for gigabit ethernet. Linksys had delivered with a good value product with an incredibility ease of setup, and a low entry price point, with the option for future expansion by incrementally (and painlessly) adding more nodes. Who knows what would be installed for us next?