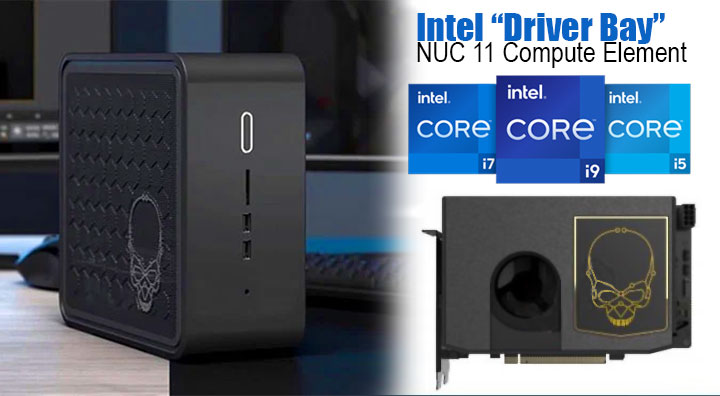 Looking back, we last saw the Intel NUC 9 compute, code named “Ghost/Quartz Canyon” last year. It was a revolutionary product at its launch, building on the Intel NUC tried and tested layout. New for this year is Intel Driver Bay NUC 11 Compute Element. Here is what we know about it so far.

In a nutshell, the compute card unit is sized like a graphics processing unit (GPU) and interfacing with a proprietary daughter board via a PCI-E 16x bus slot. Moreover, this is the first time Intel is doing a refresh of the compute card series.

From the news leaked by chiphell, the 11th iteration see a bump in specs on this similar layout. Currently, what is on offer is a processor refresh from 9th-gen CPUs to the 11th-gen, meaning that we can see the compute card upgrade following an upgrade path of two-CPU generation cycles (Skipping the 10th-gen) per computer card cycle refresh.

Furthermore, the H-series CPUs are performance laptop-class CPUs are primarily used in compact mini PCs. It has an edge over less powerful ultrabook “U” CPUs given a higher wattage, TDU thanks to beefier cooling, such as larger fans and heat sinks which would be unpractical to squeeze into a laptop form factor. Also applying it to a desktop form factor removes allows Intel to respectively raise the wattage ceiling to 45W (boosting to 65W) over the U-series 15-25W CPU equivalents.

Hence, this translate to better system performance. Last year the 9th-gen NUC extreme “Ghost/Quartz Canyons” topped out with the 8-core Xeon 2286M, it is nearly identical in specs (boost CPU clock speed, 8 core and 16 threads ) to the range topping i9-9980HK in the compute element range, with the exception of the lack of ECC RAM support.

Moreover, the new compute element have a different external card casing design (different cooler design) as a differentiating factor but still retains the similar 2x so-dimm and M.2 slots on the computer card. Allowing you a maximum of 64GB (2x32GB) Ram but with support of higher-clocked 3200MHz RAM. Though I would love to see support for 128GB of RAM via 4x on-board so-dimm slots.

Notably, there are no word on whether an 11th-gen Xeon CPU offered in the range at the time of writing to replace the Xeon 2286M on last-gen Quartz Canyon NUC9VXQNX3. Neither is there word yet on a refresh on the external chassis design to able to accommodate GPUs larger than 8-inches in length.

All in all, other than that, the offering are similar of what to expect as an upgrade from the previous gen compute card. that’s missing is information on pricing and a release date. Stay tuned!

Here are the new specs and connectivity in a nutshell: