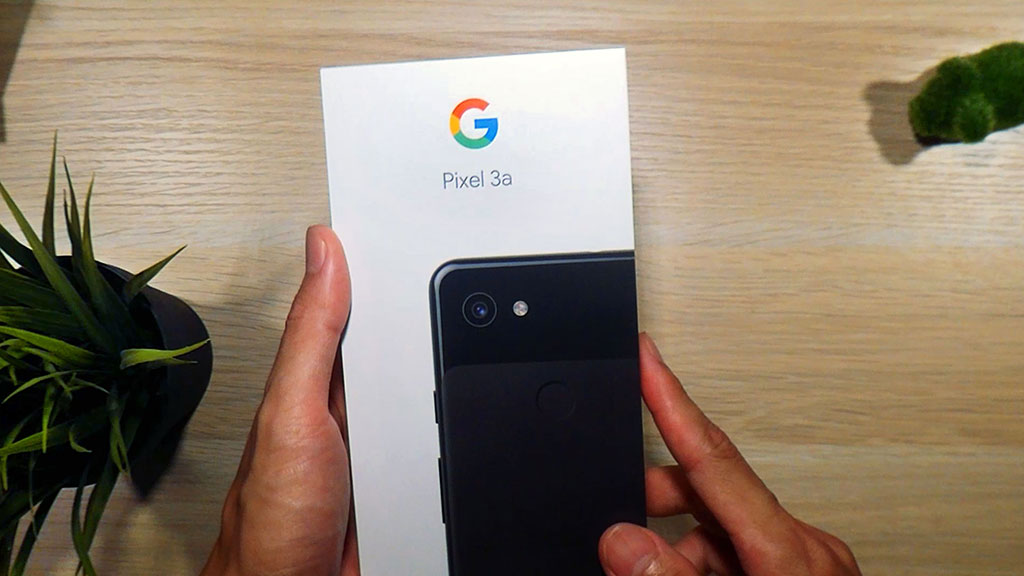 What’s in the box of a Google Pixel 3a? Today we’re going to check it out with an unboxing of the new Google pixel 3a. Let’s check it out in the video below:

A Look around the Box exterior

On the right of the box, we have a side profile of the phone. Pictured on the right hand side are only few buttons on this side. The power as well as the volume rocker. There’s isn’t any buttons on the left as shown by a plain Google logo on the left. At the back #TeamPixel and as well as the shot of the product itself nothing really much. Finishing up the exterior are serial and IMEI numbers at the bottom of the box.

Opening up the box reveals the phone. It is placed the other way around with the rear side facing you. What we have visible here is the 12 megapixel Sony camera, as well as the rear fingerprint sensor.

The phone sits in a removable cardboard tray. On top of it is another Google pamphlet holding the sim ejector pin. It is placed seated on a piece of paper. Also, inside an envelope-like paper sleeve is a very simple quick-start user guide. It is a simple guide showing you all the basic functionalities, like where the sim tray is located (hint it is on the left side).

Additionally, the last of the items in the sleeve includes a warranty and safety information as well as a team pixel sticker. That is pretty much everything. The stickers probably reminds you of the Apple stickers you can get with the iPhones as well.

Moreover, under the phone tray is a USB-C cable. It’s a charging cable as well as a data cable it’s a USB-C to USB-C male cable. Tucked at the bottom of the box in a cardboard sleeve is where the phone charger is. In Singapore, you get a UK three-pin variant.

This is very much similar to the Samsung chargers we see with the pop up ground pin. Hence, it actually charges through the charge two metal pins, with the non-conductive “ground” center pin being a placeholder. The charger USB-C port allow fast charge of up to 18 watts.

On the charger unit itself it says that it is rated to output nine volts at two amps, stepped up from five volts and 3 amps. This adds up to 18 watts total as a fast charger. And what else we have in here. What’s tethered down pretty tightly to the base of the box is a non-removable cardboard tray housing a little USB adapter.

It is a USB-C to Type-A female adapter connector which goes at the bottom connector of the phone. This allows you to extend your phone to plug-in external devices and peripherals like a mice or keyboard etc. Notably, there isn’t a headphone adapter in here because this phone actually has a 3.5mm headphone jack at the top.

Hence, you won’t expect a dongle-fest here. Also, it’s nice that Google choose to bring the three and a half millimeter jack back in here and it’s always a welcome especially if have old 3.5mm headphones, audio equipment or even a microphone to connect.

Unlike most Chinese phones, like the Vivo line of phones, the Pixel 3a does not come with a factory screen-protector pre-applied. Instead, it comes wrapped in a plastic wrapping which you peel off to reveal the phone.

On a run-through of all the physical buttons on the Pixel 3a. First on the front screen-face, we have a forward facing camera and single camera the head-piece which also doubles as one of the phone’s stereo speakers. The other stereo speaker being at the base of the phone by the charging port. Interestingly, there are two speaker-like slots, but only one of them is a speaker.

Finishing up the bottom surface is a center placed directional USB-C connector for charging and as well as data sync. There is no wireless charging on this phone so you are only able to charge it through this USB-C port here.

Furthermore, you get a nice polycarbonate finish at the back. Despite being plastic, it does feels rather premium, and it does feel a lot better than a glass finish. Notably, the phone has a two-tone look and is actually pretty glossy on the upper back half. It is thankfully, not finger-print magnet. Also, this finish does feel rather premium. At the back you have Google logo, some CE information at the bottom, as well as the rear-mounted fingerprint sensor at the top.

Moreover, do note that the sensor is a bit more recessed. This is unlike the pixel 3 with the glass surface. So it does feel a lot better having to feel the sensor from the back especially swiping at the back. It is definitely a lot better if you do an unlock without looking. Also, of course topping it up is the fantastic 12 megapixel Sony IMX 300 series camera at the back.

And on ports connectivity, we have here nothing else on the left side except a sim eject tray which you can eject using the included sim ejector pin. On the top, you get a top facing microphone, as well as the mentioned 3.5 millimeter jack. The right hand side is where all the business end is. You get a power button, a single power button as well as a volume rocker.

I really like how this phone feel in hand it’s really light and you know I kind of like Google releasing a small phone in the era dominated where size matters (e.g. like phablets). Hence, it is really nice and refreshing to see good old small phones back which you can actually put into your pocket nicely without a bulge. Moreover, the phone being under 150 grams feels really light and balanced in-hand.

So that’s pretty much it for the unboxing video of the pixel 3a. It is Google’s new budget-ty but not really quite budget-ty phone. I purchased this phone at $559 SGD (About $400 USD), which is $100 discounted from $650 at an IT show in Singapore. This is probably the best cash deal you can get.

Furthermore, Google is also running an additional on-going promo at the usual retail price $659 with a Google mini bundled in. But I found that’s pretty much a bit of a gimmick you know. You can really get Google mini for less than $50 and not the claimed $79 retail price. So hundred off this price at $559 SGD is really a good deal especially for a phone which had been out for just a couple weeks.

Lastly, stay tuned for a full review. I will be doing a little bit more in-depth reviews of this phone so do check back for more.