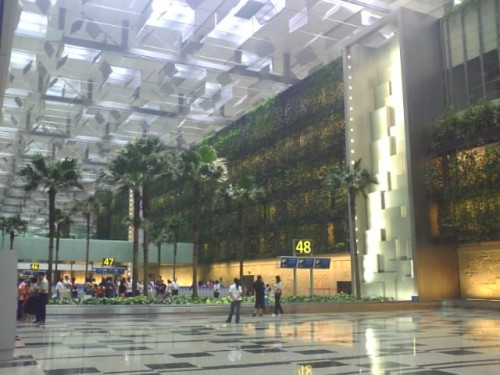 Gate holding rooms
A380 aerobridges come ready with a third arm to facilitate boarding and disembarking of both levels of the jumbo craft a the same time. There are even paired gated hold rooms with mezzanine levels in some of them. 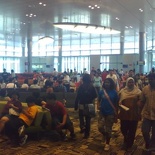 The passenger holding area, though vast, leads to 4 B independent gates in the transit hall we’ve visited (B1-B4), each capable to take on an A380 itself.

However, at full capacity, the holding area will be a very crowded place if 2 or more planes were to be boarded simulatenously, given the limited space in comparison to the large A380 passenger carrying capabilities. Given do, there are however ample sanitation facilities, nice views and entertainment to keep waiting travelers occupied.

Personally I’ve seen transit areas overseas much larger than this, despite being built for targeted planes smaller than the A380, it is a disappointment of what we lack to serve the jumbos. But I see this as a small stumbling block which encourages passengers to linger around more around the transit mall area and board the plane straightaway rather than waiting in the transit holding rooms. 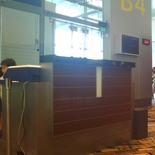 Together with few major air carriers, SIA will be the main carrier and occupant of the new Terminal 3, taking only the best (like what they did from T1 to T2 and so on). Destinations of Terminal 3 will mainly include direct long haul flight to major cities around the world. Have a direct flight to London, Paris or Los Angeles ? Be expected to board your flight at Terminal 3.

Terminal 3 also offers many ways to pamper first class passengers. After checking in the First class check in-row (Row 1), you will be welcomed to the special dedicated first class lounges with so many facilities, you will be pampered to the core. It is situated at the far left of the terminal to only to those who feel they deserve the best.

Central Immigration/Welcome Hall
Terminal 3 takes every attention to detail in welcoming their visitors in the most breathtaking and spectacular way as possible. Exit your fight through the aerogates, make your way following the arrival signages and be greeted by the vast open immigration hall with more than 10 counters to boot. 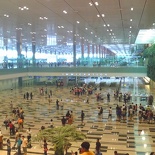 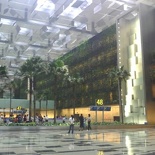 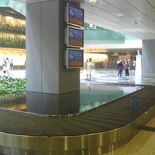 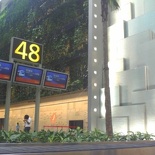 The Green Wall
The immigration hall is also the start of one end of the Terminal’s most prominent object – the 300m green wall. Complimentary and going hand-in-hand with the skylight system, this living vertical garden sits at 300m wide and 7 floors high and is home this is home to 25 different species of climbing plants draped in a neat, orderly and non-intrusive fashion, offering the best of greeny real estate in the most breathtaking and space conservative manner ever.

As mentioned, the wall runs whole length wise of the terminal, only terminating at the center departure entrance and continuing on for the remaining length of the terminal. This wall and can be mainly seen only at the departure area and the luggage collection area, where you are able to fully appreciate it. 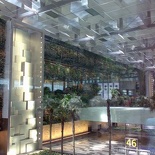 Luggage collection system
Changi Airport prides itself as the world’s busiest airport, therefore the need of an highly efficient high-speed baggage system. Terminal 3 utilizes a computerised high speed baggage system handling system which is also networked and linked between the 2 existing terminals. This system is able to send luggage between terminals in less than 10mins, traveling on conveyors at a rate of 7 meter per second on average (25.2 km/h).

Sandstone art wall
Discreetly tucked under the green wall is the hand sculpted sandstone art wall, with elaborately crafted images of waves, animals and welcome messages written in various languages throughout. With this wall, there will definitely be no language barriers to welcome any traveler with open arms.

Arrival/Greeter’s Hall
The Arrival/Greeter’s Hall is situated on the ground floor of the terminal with many transport options for travelers to move on from the terminal. There are indoor air-conditioned taxi queues on top of a vast coach waiting area. Need specialized transport services? car rentals? city limos? no problem just make an inquiry at the transport booth situated right within the arrival hall itself.

Skytrain system
Last but not least, I will touch on the Changi Airport’s $173 inter terminal skytrain system. Built to replace the few decade old Bombardier CX-100 Cars, (previously jointly built by Westinghouse and Adtranz) with ending services few years ago in 2002. The new Mitsubishi Crystal Mover-based skytrains will serve the link between all 3 Terminals on top of dedicated gate for Aerogates A15-A21. A full list of stations serving between terminals are listed below:

Here is a video of the Skytrain ride from Terminal 3 to Terminal 2:

There are 16 dual-train cars in total for terminal service, each with a capacity for 97 passengers. On top of inter-terminal transit, the skytrains will also serve as an inter-terminal shuttle service within Terminal 3 to the A aerogates. 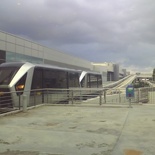 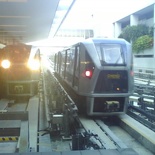 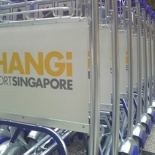 With that in hand, that is all I have about Terminal 3 given my short weekend visit, do note that despite the terminal itself being up and running already, there are still many facilities and locations still largely under construction, so the final experience might be different, but otherwise not far off from what to expect based of this report.

As a picture speaks a thousand words, I’ve compiled humorous a 202 photo album of shots taken during my stay there. Going through it will benefit you better and visualise more places not mentioned in this report, allowing you to grasp a better understanding of what to expect of the terminal when it opens come January 9th 2008.

Last but not least, I have largely the CAAS staff to thank for providing such a wonderful open house and guide around Singapore’s up and coming premier airport terminal.
Thank you!