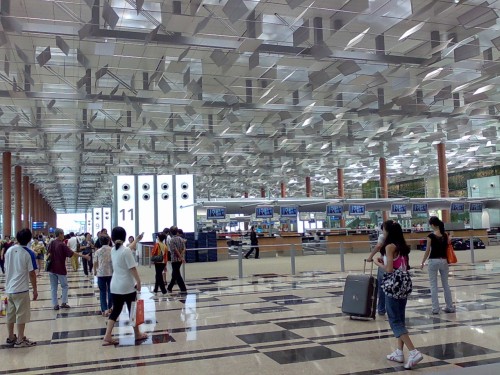 Got a firsthand experience of Terminal 3 today before the scheduled grand opening on 9th Jan 2008. Went around with a guided tour courtesy of CAAS staff not only covering the general public accessible area, but the restricted departure and immigration areas as well. For those who want to see and know more about the 1.75 billion dollar facility before most people do, read on! 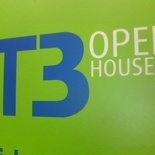 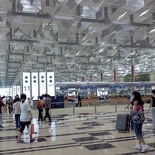 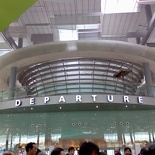 Background
Singapore had long maintained it’s pride and honor as having the best airport in the whole, however, with newer airports sprouting all over East Asia, Advanced Japan and increasing pressure from Hongkong International Airport, the Terminal 3 is our answer into pushing the benchmark further and catering to an expected annual blooming traffic of 22 million passengers. This is so given the light to cater for the traffic brought about by our integrated resorts built by Last Vegas Sands, Universal Studios Singapore at Resort world Sentosa and our Annual Formula 1 races.

Despite being put off after some considerable long delay, the new terminal is up and ready to place Singapore ahead as pole the airport for many years to come.

Read More by expanding this post or check out the full photo gallery! (202 photos) 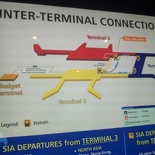 In comparison, though not the biggest in the world, Terminal 3 is naturally our biggest Airport terminal we’ve built till date, and there are no stopping of what might come up next!

Getting around
To orientate yourself to the new surroundings, Terminal 3 (Red) runs parallel & is directly opposite Terminal 2 (Yellow). Terminal 1 (Blue) fills the gap between the 2 terminals forming a “U” shaped connection between all three. All the terminals are linked either by roads, underground walkways (which are largely all air-conditioned) and the central MRT system. 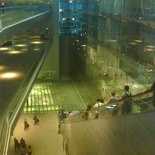 Integrated Island-wide subway system
The Airport MRT system is situated directly underground and between Terminal 2 & 3 offering passengers no-frills direct access to anywhere in Singapore through the island network of MRT lines, the MRT gantry gates are supersized to allow large baggage to pass through with ease as well.

The Airport train station also functions as an underpass between T2 and T3 as well. Our landmark “microphone” control tower sits in the center of the three terminals flanked by a network of roads and interlinking fly overs and bridges transporting passengers directly to the 2nd floor departure booth areas of each terminal.