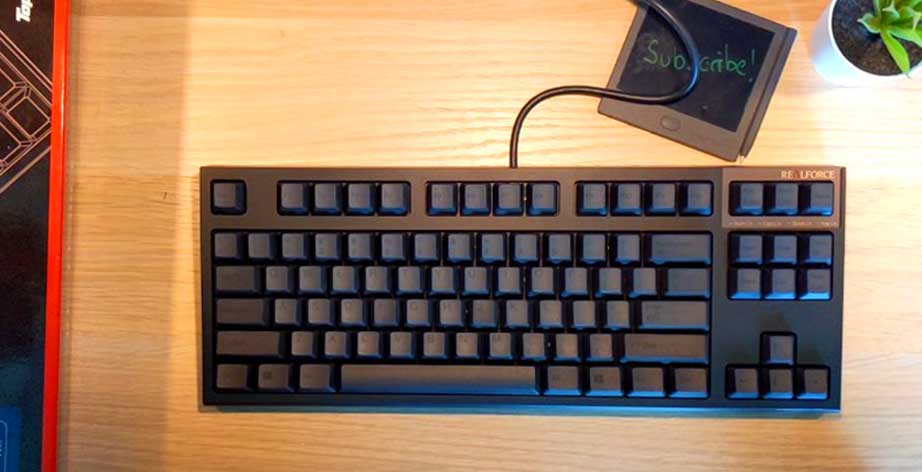 I recently got this unique keyboard on a trip to Japan a couple months back. It is a Japan exclusive keyboard made by Topre. It is sold mostly in the Japanese market. Hence you won’t be faulted if you have not heard of this brand. Topre Corporation is a Japanese engineering company that makes pressing parts. Their product line includes mainly air conditioning equipment, computer parts and various other electronic and electro-mechanical devices.

On some background, Topre Corporation was founded in 1935, and headquartered in Tokyo, Japan. Also, they have manufacturing plants throughout Japan. Namely in Sagamihara, Hiroshima, Gifu, Tochigi, and Saitama prefectures. Additionally, part of their electronic line-up includes the manufacture of premium keyboards like the Realforce range.

Moreover, I purchased this keyboard at a Japanese Bic Camera store. It is one of their major electronics departmental store which you can find in every major city all over Japan. Notably, from my hunts, Bic camera also offers the cheapest spot to get the keyboard, even beating competitor Yodobashi Camera.

The keyboard does not come cheap either. Costing 27,000 Japanese yen, with translates to $250 USD or about $350 SGD. Also, I intended to purchase a Mechanical keyboard until I discovered these capacitive keyboards, after testing them side by side by the Mechanical Filco keyboards, I was sold on the Topre ones. But what makes these keyboards so different? Lets take a run-through of the various keyboard technologies.

Furthermore, there are typically three main types of keyboard actuation methods. Firstly, are Rubber dome keyboards. They are the most modern, mass produced variant and found on low to mid-range keyboards.

They are also generally cheaper given the low complexity of manufacture and simplicity. The keyboard uses a sheet of rubber under your keys that provides the resistance, tactile feeling, and registers the keypress to the computer. They are typically rated for 5 million actuations, which translate into about 2-3 years of daily use.

Furthermore, Mechanical keyboards typically employ Cherry MX switches, with varying feedback depending on the colour. You might have heard of Cherry MX Blue. That is their line of very Clicky noisy heavy keys. Then there is the Cherry MX Red, which is Linear and light, followed by the MX Black, which is Linear but heavy.

Topping up the line are Cherry MX Brown with a Tactile feel. Mechanical keyboards typically have a life span of about 20-50 million actuations. With better quality keys hitting up the upper limit.

Moreover, there are 3 types of key feedback. Starting with Linear, with keystrokes being consistent and smooth throughout the entire height of a keypress. It gives predictability. Secondly, Tactile feedback typically gives you a bump feel in the middle of key travel. It is usually around the key actuation point. The last type is Clicky, a more exaggerated version of Tactile, where you feel a bump in the middle of travel accompanied by a sharp audible “click” sound.

Now on to the main topic of Capacitive keyboards. Unlike conventional rubber-dome keyboards, the Topre’s dome does not provide any “mushy” resistance near the bottom of the stroke. Topre touts that their Capacitive keyboards are very stable with no chattering. The lack of a contact mechanism eliminates double entry malfunction. 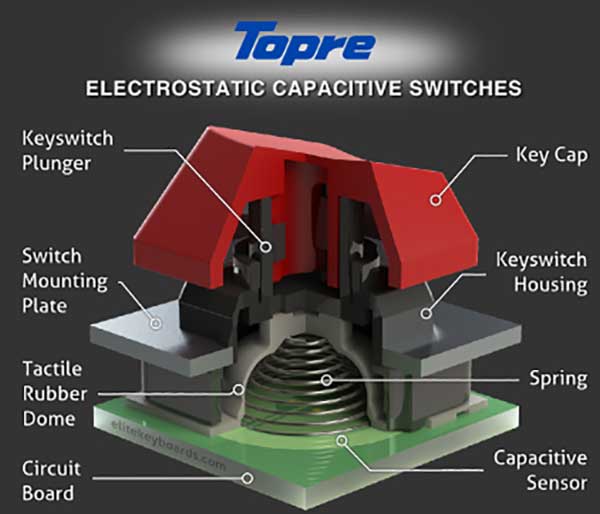 Theoretically, capacitive sensors can last forever, but the use of certain mechanical parts rates the keyboard at about 50 million actuations at least. This puts capacitive keyboards ahead of even Mechanical keyboards in terms of longevity which can go for at least over 10 years of daily use. Hence this somewhat justifies the steep price of the Realforce TKL capacitive keyboard.

Additionally, the keys are really soft and nice to the touch. After trying them side by side with a Filco mechanical keyboard, I was sold by how accurate the keys feel. They are far better than any other gaming Logitech or Razer gaming keyboard I had used. I particularly like the linear and silent feel of the keys which makes typing in quiet environments less of an annoyance.

Furthermore, Realforce offers their keyboard in 3 different key weights, 30g, 45 and 55g, where the weight is shown by a single digit after the keyboard layout symbol. Alternatively, you can option for a “V” or variable model which gives each key a different weight throughout the keyboard to cater for the strength of each finer to reduce fatigue after long durations of typing.

A joy to type

The keyboard has an 87 key layout. It is essentially a full sized keyboard with the numeric keypad on the right excluded. You get full-sized insert, home, delete keys with a generously spaced cursor key area as well. You activate a numpad shared with the letter keys when you toggle the numpad.

Also, the CTRL key is on the extreme left, where it should be and the Fn key on the right. It allows you to toggle a range of app shortcuts like calculator, browser and also media controls with an Fn combination on the F1 to F12 keys. An included instruction manual in both English and Japanese aids with his as the keyboard secondary functions as they are not labelled on the keys themselves.

Furthermore, a benefits of capactive keyboards is the ability to change the actuation height. This is the distance at which the switch needs to depress to register as an input. Measured from the top of the keycap. Some higher-end Realforce keyboards do this via the Actuation Point Changer (APC) function. There are three height you can set via software, first with Blue at 1.5mm high, Green 2.2mm and Red 3mm. The LED indicators on the keyboard shows the status of the APC levels.

The benefits of APC is that it allows you to vary your keystrokes, with shorter keystroke are better for RTS and FPS gaming, given lower response time. Also, longer keystrokes better for distinguishing between keys useful in MMORPGs or for ensuring error-free documents for work.

Lastly, wrapping things up, lets get our head reading Realforce confusing model numbering system. The Realforce keyboard model I have here has the model number R2TLS-USV-BK. You can read their models numbers as R2TL(slient)(APC)-(layout)(keyweight)-(colour). R2TLS meaning Realforce capacitive “TKL” meaning “Ten Key Less“. “S” in the R2TL(S) as it is a silent model.

If it as an Actuation Point Changer function, the S shall have a letter “A” too. “USV” means US keyboard layout followed by an alphabet of the keyweight, and colour. Realforce offers their keyboards in two colours, black and ivory. While the black in this case here is my preferred modern colour.

All in all, I would recommend the Realforce TKL capacitive keyboard, mainly for the ease and great feel when typing. The feel is unreal and unlike and far better than any Mechanical keyboard I had tried on. But do expect the pay a premium for this keyboard though, but the end results is a typing experience like no other.