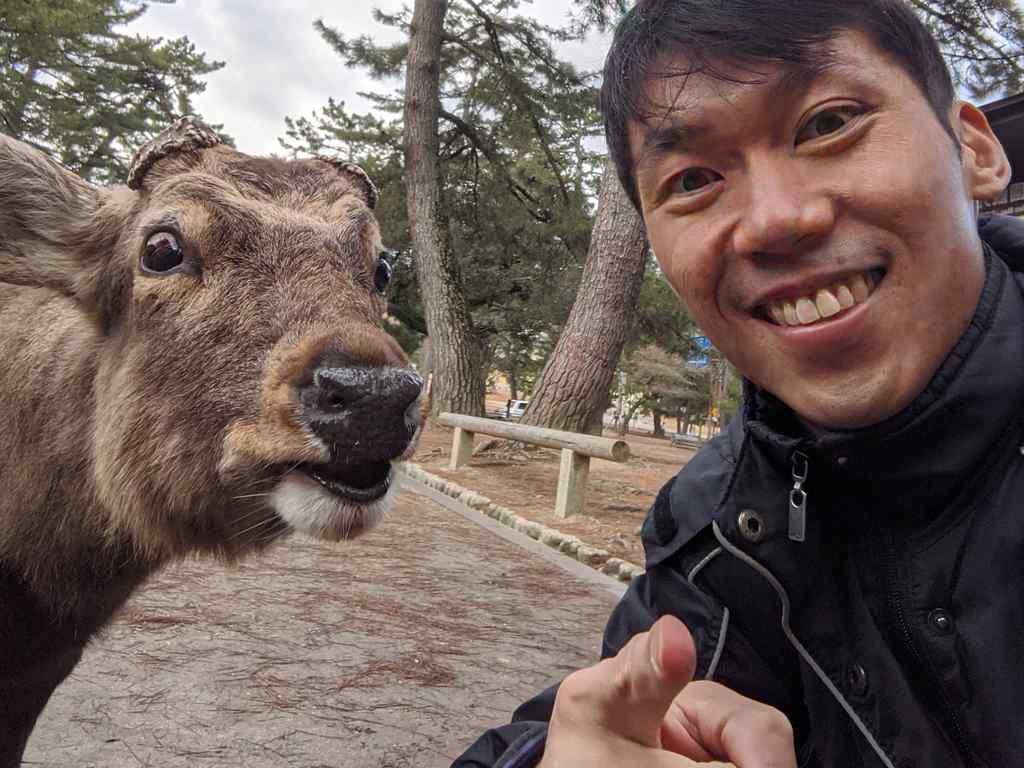 Nara park Japan is chill little city in the capital of Japan’s Nara Prefecture, located in south-central Honshu, Japan. Established in 1880, notably, the city of Nara sits at the foot of Mount Wakakusa and is known for their open free-roaming Deer.

It is surrounded with lush vegetation and devoid of tall skyscrapers typically seen in Japanese capital cities like Tokyo. Also, it does provide a calming atmosphere. Let’s give the city and the park a look around today and check out the sights.

Getting to Nara park Japan

Nara is close enough to Kyoto and Osaka to warrant a day trip travel between them. Also, Nara is not large enough for a need to warrant accommodation stay there. This is considering you can pretty much visit all of Nara key sights within a day. Hence, it is advisable to find touch base in either the more buzzing Kyoto or Osaka cities for accommodation. 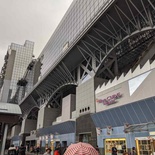 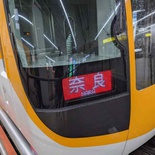 The train to Nara park Japan 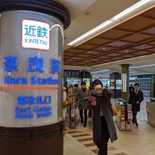 It costs 720 yen and is covered by the Japan Rail Pass. Also, trains from Osaka’s Tennoji Station takes 30 minutes, costing 470 yen one way.

Moreover, a departure from the alternate Osaka-Namba station from Osaka on local rail takes 45 minutes and costs 810 yen one-way. You land at a station with a mini mall complete with Food and Beverage outlets, there is also a Daiso here.

Spanning 660 hectares, Nara park (Nara-koen park) was established in 1880 and is one of the oldest parks in Japan. Moreover, a big component of Nara is Nara Park is a public park full of deer.

Also, the deers are an attraction in its own right and probably the reason why most people visit Nara. The city is literally a deer town. The deer are freely roaming around in both park and temples. You encounter the deers at the first green spaces after a short walk from the train station.

Deers are divine and sacred

Moreover, according to local folklore, Sika deer which roams the parks from this area were considered sacred. In Shinto religion, animals are deemed to be god messengers or even the gods themselves. The deer in particular is that from deity figure Takemikazuchi-no-mikoto. Interestingly, the deer were actually considered divine and sacred by both Kasuga Shrine and Kōfuku-ji. Back in the old days, killing any of these sacred deer was a capital offense punishable by death. But no worries today, as the capital law was abolished in 1637. However, any unauthorised harm to the deers is still an offense.

Sometimes, you could see traffic on a street coming to the standstill (in pure Japanese fashion) as vehicles allow deer to cross the roads. At times traffic jams are caused by deers simply seen lazying by the side of the roads.

You can feed the deers too. You can purchase a small stack of biscuits at 150 yen from various street side vendors and shops in the park. The deer will simply take a nip off the cracker and might stay for more. Also, the deers had probably learnt a thing or two about Japanese greetings. At times you can see them head-bowing to you in reply after you did the same. For the record, the Deer make noises which sounds like high pitched deflating balloon.

How to prevent deer swarming

Furthermore, an outstretched hand with a cracker is an invitation for a deer swarm. Deers in Nara are generally non-aggressive animals towards humans. Though during the mating season in the early months of the year, you can see males head butting each other. Also the sharp deer horns are all trimmed by the park authorities making them safe for you to interact with them.

Despite this, about 120 people were reported to be injured by deer every year. Accidents usually happen when tourist do not how to manage the situation and end up panicking and agitating the deers. Also, multiple Deers could start to swarm around you if you are too generous with your deer biscuits.

There is a technique to deal with his. When things start to go out of hand, a simple method is to simple open your empty palm out. Deers who see this lack of food will all automatically start to disperse from you.

Furthermore, Nara city has significant temples and artwork dating to the 8th century. It is during the era when it was Japan’s capital. Historical highlight for your trip here in Nara Todai-ji Temple (Nara’s largest wooden temple), the Kōfuku-ji, Kasuga-taisha srhine and Yakushi-ji. Both Kasuga-taisha and Yakushi-ji is an additional sight little out of Nara city, with the latter being one of the most famous imperial and ancient Buddhist temples in Japan with two 34 meter tall three-story pagodas, Tōtō and Saitō. They are regarded as one of the finest pagodas in Japan, representing Hakuhō to Tenpyō period architecture.

Additionally, at Noborioji Park from the station is Kōfukuji temple. It is Buddhist temple tracing it roots from 710 AD, consisting of a five storied pagoda. Noborioji Park is also your first open park space which you can encounter the deers from the Kintetsu-Nara train station.

Adjacent to the park is the Nara National Museum grounds. It is a national art museum. Notably, deers roam freely in both the Kōfuku-ji, Tōdai-ji temple and Nara Museum grounds as they are all within the grounds of Nara Park. 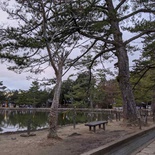 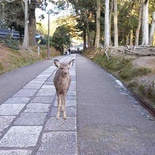 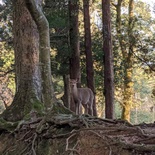 A key attraction here in Nara park will be the Tōdai-ji temple. Lets check it out!

Moreover, Tōdai-ji is a Buddhist temple complex that was once one of the powerful Seven Great Temples in Nara. Historically, it was originally founded in the year 738 CE when Nara park opened in 728AD. Also, it is home to the giant Daibutsu Buddha.

From the Nara museum east wing area, you begin your walk towards Tōdai-ji through a park. Here, you can also find the Isui-en Garden (tea garden) within the vicinity too. Greeting you along the walkway towards the Tōdaiji Nandaimon Gate. It is a large vast grand wooden entry gate. It was built using the “Daibutsu style” with two fierce looking statues as its guardians.

The Todaiji large wooden hall and temple houses a Buddha hall, which is home to Daibutsu, Tōdai-ji’s 15m-high bronze Buddha as its highlight. The Buddhist temple is open 8:00 am to 4.30 pm daily, and costs 500 yen to enter the hall, which goes into running and upkeep of the area.

Ticket entry allows you into the temple grounds offering great views of the magnificent wooden temple structure. You circle the giant Buddha within the temple with several other deity figurines littered within too. 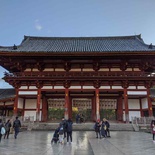 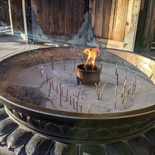 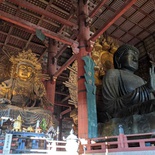 Interestingly, near the end of the loop is a hole in the pillar called the “Buddha’s nostril”. It is said that you can earn enlightenment in the next life by crawling through this symbolic nostril.

A good way to end your trip to Todaiji is the visit its Panoramic hall located on top of a hill within the park grounds. Check out the breathtaking views of Nara city from the hilltop.

Called the Todaiji Nigatsudo, here, it offers great overlooking views of the city from a wooden pavilion vantage viewing point. This balcony is located on the upper shrine area of the temple and manned by a couple of devotees you can meet up here. 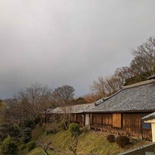 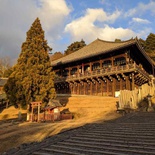 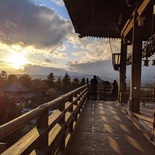 Notably, the views up here are a good way to end your trip to Nara with a sunset view with history and culture.

All in all, Nara park Japan, the city of deers as what I come to call it is full of culture, with significant temples and artwork dating to the 8th century, when it was Japan’s capital. The free roaming deers in Nara Park does distinguish it from other Japanese cities just for its quirky and unique-ness which you have to experience in-person to believe it. Definitely a worth a day-trip visit just for the Deers.