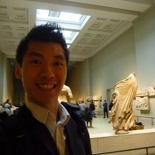 Ah yes, so much for mentioning the British Museum & 39 Steps in the post title, actually the whole reason for me to be in London last Saturday was an invitation to a lunch seminar at Royal Garden Hotel organized by PS(D) for SAFOS, SMS, DMS and DSTA Scholars studying in UK. It was a rather small lunch event, held in one of the seminar rooms with an attendance of about 50 people tops filling up about 5 tables. The best part is that we had some form of “local cuisine” at the event, namely Laska, Char Kuay Teow, Siew Mai, Chicken Rice, not to mention a weird reproduction of Ice Kacang.

Nonetheless, got to meet catch up with familiar faces, not to mention meeting up with quite a number of new ones as well. There, I had an opportunity to voice some concerns over the lack of availability of first year internships for scholars, glad I got that cleared to big boss who was at the event to take note of any problems and suggestions.

The day just literally started after fueling up with the lunch buffet. With spring around the corner, it’s not usual to see anyone dressed with a shirt and suit walking round London- and that was literally my attire for the day! And I say, this suit was made for this weather- no way am I able to pull this in Singapore without even soaking through all my clothes in sweat. 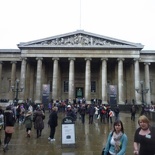 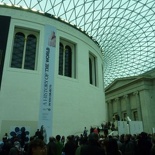 The Great Court of the British Museum 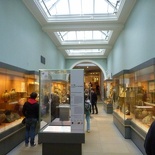 My first stop was the British Museum, to meet up with some friends to do some planned figure and still life drawing on the statues. The museum is a short walk from Russel Square station and park. Going around London is quite a no brainer for me, even when visiting new places. In the worst case scenario, I will always have my phone’s GPS and tube map to guide me through. That Saturday was my 2nd consecutive weekend in London, I say, I am starting to get the hang of traveling through and fro between London and Cambridge through rail. A rail journey will set me back only 40mins on a high speed rail and it’s made more worth while with my railcard to boot the prices down. Definitely gone was my impression of long boring journeys so as I came to know of about from my first bus trip from London Heathrow airport to Cambridge. 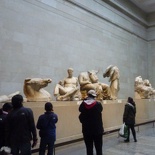 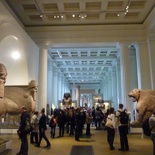 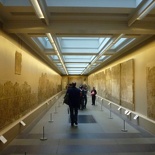 And so yes, the museum, you will be greeted by this huge glass sky roof upon entering the front doors. Known as the great court, this was a magnificent upgrade to the museum which was once to be an open air court yard surrounding the reading room. With only time to tour the first floor, the museum has quite an extensive of prominent Egyptian and Greek sculptures together with a collection of Chinese, Greece, Roman and Ancient Cyprus objects. The things which really stand out will be the Egyptian stone statues which is part of a theme the museum was showcasing at that particular time. These statues proved to be a rather popular piece with many artists seen littered all around the museum sketching the various poses and practicing anatomy drawing on their sketch books and canvases. Met up with my group and started drawing for about an hour until the museum closing time at 5.30pm. Time to meet my college mates for dinner!

We met up with my college mates together with some new friends studying in LSE at the station, they recommended this Korean joint near Totterham station called wu jung. The restaurant is like a typical 2 floored shop house which is no different to that of the 5-foot walkway stalls in Singapore. They serves some rather niffy Korean BBQ chicken and pepper mix which goes awfully nice with rice and the omelette sides we ordered. Having brought tickets the day earlier, we hit the tubes again after dinner towards criterion theater at Piccadilly circus to catch the musical for the night: 39 steps 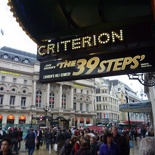 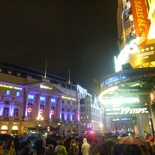 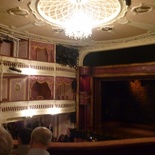 39 steps the musical is based off an adventure novel by the Scottish author John Buchan, first published in 1915 by William Blackwood and Sons. This theatrical adaptation by Patrick Barlow opened in London’s Tricycle Theater, and after a successful run, transferred to the present location here in Piccadilly. This comical version is exceptional and is really full of laughs, the thing which makes this carnation of the story unique is that it is only performed by a cast of only 4 actors and actresses, often with all of them, except for the protagonist playing multiple roles through the musical, which was really laughable in a way given the way they switch through the roles right on stage. No wonder the Broadway production received six Tony Award nominations, winning two—Best Lighting Design and Best Sound Design with the London show winning an Olivier in 2007 and two Tony Awards in 2008. The play also won the Drama Desk Award, Unique Theatrical Experience. Recommended indeed.

My only gripe was that the tickets actually costed cheaper by buying them at the theater (£22.50- lucky for those in the group who wanted to join us at the last minute) compared to £29.50 per head when I initially brought them in bulk online. Despite being told that these £22.50 tickets are lower class tickets (usual £45 walk in rate), but they are indifferent and right on our seating row as well, go figure!

The play was 2 hours long ending 10pm. Would be planning to catch Avenue Q next. Then it’s a short train journey back thereafter to the Cambridge station and a cycle back to college by midnight to end a day well spent.