School starts in a few weeks time and it’s time for my flight to Cambridge before term starts. My flight was seduled on the late night of the 27th, a Sunday at the Changi Terminal 3. After dinner within the airport with my family and a long farewell to friends, relatives and loved ones, I slowly made myself through the departure, which for Singaporeans, is rather fast and brisky, particular for the Passport scanning part- no need to wait in long queues for stamps and such, just scan, thumbprint and go.

There were no gate numbers printed on the board pass, so that needed little hunting on the screens to find yours upon entering the departure walk and duty free areas. The gate check was a little messy, especially those who were carrying laptops with them, I have 2 of them with me and they have to be individually scanned through the x-ray, to my dismay with lots of re-packing to do. My flight is on a A380 and I always particularly hate long haul flights, this 12 and a half hour one is no exception either. 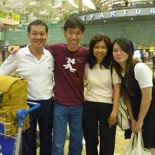 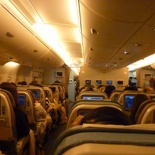 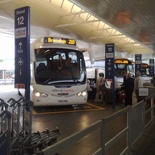 The journey to Cambridge
On the contrary, the flight on board the plane was quite smooth and slightly quieter than most planes I’ve flown before, it’s so much better than being on a 747 as well. The A380 does not have the typical drowning “airplane smell” which I hate. The food is great, can tell it’s prepared largely by Singapore chefs, not sure what food I will get if I were to fly from London to Singapore tough. Despite sleeping like 5 hours on the plane, man, was I still very tried after that flight. Surprisingly, I still managed to get that much sleep despite tossing and turning round much- the seat is just too small to be comfortable for a sound sleep, managed to catch the movies fast and furious 4 after takeoff and transformers the fallen on the flight before landing.

Back at Singapore before my flight at the SIA check-in, my parents did indicate that I may need some assistance from the airport in Heathrow. Considering that I was still recovering from a stiff ankle following a minor surgery from an injury. The SIA staff were rather helpful, they saw me out of the plane upon arrival and there was an Airport representative staff from SIA which walked me through the whole arrival hall and helped me at the baggage carousel (which weighed over like a helfy 20kg and was too heavy for my injury) glad there was help! Immigration was a breeze as well, with just a need to show my university letter and I am off to the arrival area with 2 hours to spare before my coach arriving timing. 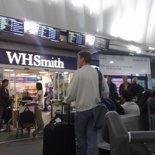 Sat round the airport for an hour or so reading a book and got about chatting with a Hongkong family there before starting on a 15 minute underground walk with all my baggage from Heathrow T3 to the Central bus station. The bus arrived on time as expected and did not wait long before setting off, so it pays to be early or you can easily miss your bus. I did not sleep much on the bus, but did doze off sometime in the journey, but the country side views throughout some parts of the journey were rather nice. Along the highways, you can see nice rolling hills and large open fields. There are always cows and horses on those fields.

Contrary to what my dad always warned about highway truckers and driving in the UK, from my observation, the trucks on the motorway all drive slowly here (no speeding), not like what dad said, maybe he’s just paranoid for my safety. In fact, the highway here is almost like that in Singapore with the trailers. Most with speed limiters as well.

The National Express coach trip (service 787) is about 2 and a half hours from Heathrow, going in and out many airports, rail stations and towns along the way. Despite the rather loopy journey (which effectively almost doubled the traveling time), got to catch many interesting new scenes around town as well. My coach journey terminates at the Parker’s piece in Cambridge where I managed to flag a cab almost instantly to the college which is about 2km away. The cab fare was a 10 minute ride, costing 5.80 pounds. The next and final moment of my journey I saw myself standing right in front of the college flagpole. The stone path in front of the college are not exactly roller luggage friendly, but I am there! 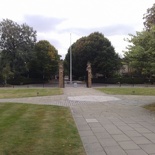 The front of the college 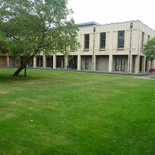 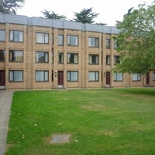 The porter there brought me on a short introductory tour and gave me the college welcome pack as well as ran through the administrations required for the wolfson card, which is essentially the college contactless smart card. Got to meet many new faces, particularly my engineering buddies who were already on college few days before me. There are many Singaporeans and Malaysians studying in this college as well. Had lunch and dinner within the college grounds for the day which is really a great life saver having not to cook or prepare my meals, anyway I will see myself eating often in the college dining hall. I am just too lazy to cook! Oh yes, there’s free pizza form dominos for freshers as well! 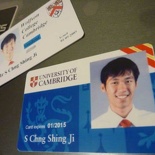 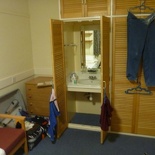 My room, well always in a mess 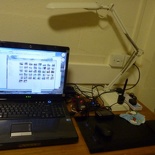 Time for an update!

There much to unpack and organize myself around. Will be up exploring much of the town in the days to come. It should not be too different from what I last recall of it. As you can see, my room is kind of quite a mess. Had not slept at all since lunch though I did had some coffee then and been up till like 10pm London time (which is about 5am Singapore time here) since yesterday. I should be hitting the bed soon and maybe prepare breakfast myself as I might be too lazy to rise early enough to catch breakfast in the dining hall tomorrow morning.