You know sometimes in and out as an internet user you will encounter comments in various blogs or forums which are not always as constructive as you intend them to be. It always seems that the internet “comment” function has it’s role primary as a way of effectively (and most importantly) a way to convey constructive thoughts and feedback to the intended parties.

But as any internet user, we all know, they are mostly a mean to flame shoot or bang at anything people find unworthy and that is something worrying an evolving in internet comments. If comment posts going “FIRST!” don’t bug you, then the frequent negative criticism from user’s periodic mood swing might add more “value”. Well so I can conclude from my not-so-formal research on and being a regular reader on few high traffic blogs on blog networks such as those by Weblogs Inc. and Gawker Media (to name afew) or even videos on Youtube. Can we conclude that the average intelligence of an internet comment is close or equals to zero? Let’s put Einsteins theory to work so, to prove it. 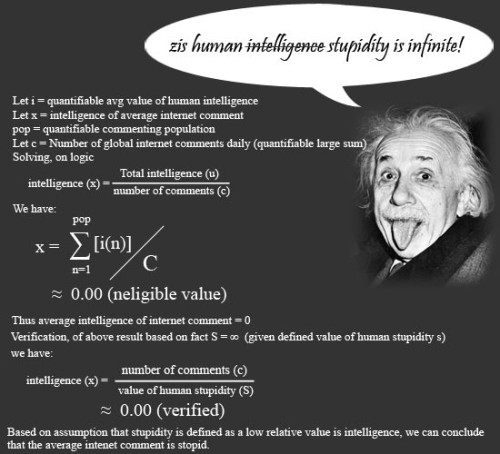 Yes, that is a joke and so is the math, so take no offense on this. Do note that there are of course exceptions, such as constructive feedback and comments, where we can rank them as above average comments, so don’t be offended or hesitant to comment. But so does that also mean that there is a higher concentration of intelligence from lower commenting blogs?

Having said that, striking an example, I am also a regular reader on few more professional blogs, such as medgadget for example, targeted at medical professionals and contributed by doctors alike, but despite being a almost high traffic blog (like engadget itself for example), the blog do not receive many or even zero comments for many posts.

So is riding on the saying “empty vessels make the loudest noise”, really paint the situation on internet commenting? Or are there just too much nonconstructive crap that it just paints and reiterates Einstein’s theory of human stupidity?