Home Blog Interesting Stuffs Lego A380, the biggest Lego airplane ever made 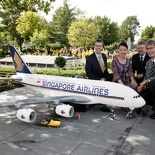 I had been always a fan of Lego, having grown up with them since I was a kid, even I do occasionally build some contraptions of my own especially with the Lego Mindstorm series. So what do you get when you bind them and the world largest commercial passenger jet? You get the world’s largest Lego airplane model.

This Lego A380 is the largest aircraft model on display in LEGOLAND and is built entirely of over 75,000 LEGO bricks in eight colours. Situated at its exclusive display at “MiniWorld” in the main LEGOLAND Park in West Denmark, the SIA A380 model spans 2.9m in length, has a wingspan of 3.2m and is 1m tall.

It weighs a total of 125 kg including 100 kg of LEGO bricks, where the rest are made out of mainly supports, binding glue as well as the motors and speakers which spins the turbine blades and create sound effects. The SIA A380 model required the skills of the entire team of professional LEGO model builders at LEGOLAND and took 600 hours to produce.

“As Singapore Airlines will be first to fly the A380, we also wanted to be the first to bring its scale, grace and form to LEGOLAND. An A380 built of LEGO bricks retains the breathtaking dimension and scale of the actual A380. However, working in LEGO bricks also puts the A380 into a scale that people, especially children, can appreciate and enjoy. We welcome the opportunity to be associated with LEGOLAND in Denmark,” said David Atkins, General Manager Scandinavia and Finland, Singapore Airlines.

“In LEGOLAND we focus on the guest experience and are excited about introducing LEGO models in the park,” said Henrik Höhrmann, General Manager in LEGOLAND Billund. “Therefore we are very pleased to have the opportunity to show our visitors the world’s largest Singapore Airlines’ aircraft built in scale 1:25 in LEGO bricks.”

You can view a short video of it here.