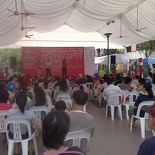 However, heart diseases are in fact mostly preventable. So an understanding of this serious health threat can make a lifesaving difference, therefore the need for the Go Red For Women 2008 event to spread the good message and awareness. Held today at Yew Tee MRT open grounds, the Singapore Heart Foundation’s (SHF) Go Red For Women campaign aims to educate women on the risk factors of heart disease and encourage them to go for regular health screening at the Singapore Heart Foundation.

My day started early in the morning with me getting acquainted with the organization of the event as well as few new volunteer faces I’ve not met in the pre-event briefing. The event takes center stage in a large white tent right in front of Yew Tee MRT station along with several carnival booths by various event sponsors, all situated in the main tent with our SHF booth as well. The guest of honor of the event was Dr Amy Khor, MP and Mayor of South West District as well as Mr Zaqy Mohammad, MP, Hong Kah GRC.

We also have free public health screening courtesy of Singapore Anti-tuberculosis Association (SATA) at the nearby HDB void decks together on top our of 10,000 step challenge and supermarket nutrition tour planned throughout the day. 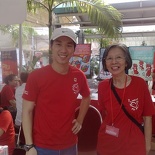 As part of SHF goals to spread the health message and awareness, my responsibilities and job scope there was pretty multi functional as well based on the current needs of the event-merchandising, flag selling and asking for donations, on top of as being an event promoter and registration officer for our health events.

We have an event called the 10,000 challenge, it is a treasure hunt event held within Yew Tee area itself where the top teams can bag prizes. Participants are given a map with 10 check points where they have to complete in sequence. Participants will be challenged with a task or few heart/health questions upon clocking in and only upon successfully completing it where they will be given a heart sticker of approval to carry on. Upon completion of the whole tour, they would have done 10,000 steps, therefore the name. I was a game station marshal for the challenge which required extensive area coverage therefore involving both volunteers and full time SHF staff as well. 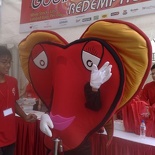 The 10,000 challenge ended around 5pm where the game marshals involved packed up for the day and carried on with our duties in fund raising and booth manning till late.

The event was very fruitful as a whole, besides helping out with the Singapore cancer society previously, this event with the heart foundation taught me not only more of the dangers and consequences of health, particularly heart diseases and also much on event management and coordination as well, given my other roles and assigned commitments in the event (beside my primary fund raising role).

All these definitely are not only in the good light and benefit for our women, but also the well-being and health awareness of Singaporeans, young and old as a whole.