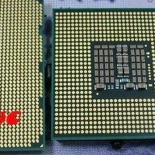 Little background of the upcoming processors and socket, as shown on the picture on the left, the larger LGA1160/1366 chip is based on the Nehalem platform spotting between one and eight cores running on the Intel LGA1160 and LGA1366 sockets. Noteworthy is the return of Hyperthreading in this processors- capable of handling two independent software threads per core and allows a processor to execute two different code streams at pretty much the same time. So technically if it is a quad core, it’s like having almost the equivalent of four Pentium 4 CPUs in one processor. And if that is not enough, the chip will too spot integrated memory controllers for DDR3 SDRAM with 1 to 4 memory channels. Expect the see the first few Nehalems made with the using its 45nm manufacturing process out end this year. 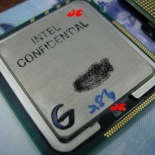 You know, it’s always the case in the technology sector, particularly the PC components area- just when I was about to get my first major PC upgrade in 7 years, a new LGA socket is coming around the corner making any purchases you make now this year outdated by this year end. With Intel’s processors in particular, I was eyeing the Intel’s LGA775 sockets for awhile to succeed my old socket 478 Pentium 4. But considering they had been around for many years (about 4 years now), to my dismay (yet no surprise) that is going to be replaced by the Intel LGA1160 and LGA1366 sockets coming end this year!

Yes I do need an upgrade now but I am not doing it! Come to think about sometimes I don’t practice what I peach myself- recommending people on hardware sites to get what they need now and ignore the inevitable progress of technology, but playing the waiting game myself as well. So the question now is whether I can hold till year end for the Bloomsfield or get the Yorkfield now but don’t invest so much in it (maybe a Q9300 will do).

Looking back I don’t upgrade as lavishly as most hardware enthusiasts, and prefer to get something which can last me 5 years or more at a go, I’ve skipped AGP 4x being the first few adopters in Singapore of AGP 8x from PCI graphic cards. 7 years had seen me now completely skipping and PCI-E 1.0 and the Intel’s Core 2 duo moving from a Pentium 4 to an Intel Quad Core if so. So this “tech skipping” habit is quite evident as so as I noticed. On a sideline to decisions, I might also consider investing in a more powerful and dependable PC if I were to bring it aboard for my studies as well.

Come to think about it, the only future proof item I may own could be my PC casing!

Shaun - Saturday, September 4, 2021
Today, letā€™s check out the Duck tours with a ride through the uniquely Singapore tour around the Marina Bay. Interestingly, the ride and guided...