Got a call from Josh Lim, the CEO of Advertlets today with regards to my views about them I had on my previous blog post. He apologized for the problems they had caused, especially with the delays in payment, we ironed out fews issues I had outstanding in mind, especially on improving their customer response and that really eased many of the problems I faced with them. Ultimately, we can see negative publicity is the least constructive to their business so it was quite an anticipated but rather fruitful overseas call (KL) within such a relatively short timespan of the complaint.

We started by addressing few cases he highlighted, namely on blogs cases, especially from slowcatchupkuan.blogspot.com being exceptional as he had a case of excessive amount of click fraud, so his account was banned and therefore the flame which rippled greatly over the anti-advertlets community. He also highlighted the embarrassing incident of failing to pay for their blogging event (as told by danielfranklingomez.com) largely a regretful one given a problem rising based on assumptions and miscommunication on their part. And despite having done over 10 majors successful events, this was the one undeniably one which sticks up the most like a sore thumb and had the most lasting impression by the community, after all it’s quite a fact in life that people only remember your bad moves.

The interesting thing was him inquiring when that particular cheque I’ve received was dated for, as there will usually be a slip in the mail together with your cheque stating details and such, (well so as I was told something their Malaysian bloggers will receive). There was no slip of paper in my case, only just a cheque in the mail dated 24 March by the bank. Given February being my last cashout, it was a case of assumptions as well- that I will receive (based on the 2 leadtime months claim) on April, which I did, so naturally it will give the impression to me that it was the payment for all my previous months that I was unpaid for, only the value indicated is way below my total cashout at that present time. 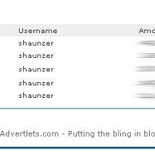 I guess for him it was simply “opps!”, so apparently the problem was a mistake on their billing side. They rectified the issue immediately on my account and upon logging in today and it seems that the cheque I’ve got was meant for my December cashout, but is still strangely unpaid for the November month before.

I was surprised that after a whole long incident of extremely slow customer support, things are starting to spring into life now. I was rather pushy to Josh to how they can improve their blogger-Advertlets relations as that was an area I find them seriously lacking, especially in terms of improving their email support leadtime and adding human touches into the queries they receive. After all, a little friendly competition is generally good overall, so let this be a learning experience for all. There are of course however limitations to what I can contribute as a whole, especially still keeping to my code of conduct as ultimately I am not the one involved in running their business. But overall, if it is a company willing to change for the better and learning from previous mistakes, I am more than happy to help them out with it.

It was good that Josh called up too so we can iron on the problems constructively adult-to-adult, though I felt that he occasionally got rather annoyed at times about being questioned of his style of running his business. I believed we could have discussed more issues in depth, but was unable to do so given the time we had. I believe in being fair as well as 2nd chances, I hope that this is one of the many opportunities for them to shine if they get things right. Before ending the call, he reassured me that my cheque payment was not the final sum but rather a partial payment and I will be expecting another soon, as promisingly shown by a “sent” symbol on their website’s earning page now. Verbal reassurance is very reassuring…

Will keep everyone updated on the follow-ups.