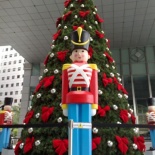 Guess I just caught the Christmas bug a little earlier than usual, nevertheless Merry early Christmas greetings everyone! it’s the season to be merry now with greetings and a happy new year to come! It’s all parties, Christmas gifts, cards and the spirit of giving now. Man do I love this time of the year…

I believe it’s also the time again to reflect on the year’s happenings, achievements and make our upcoming resolutions. And better don’t let be the all common “aim to lose weight” or “exercise more” or “earn more money”, well if one of your resolutions is the “be more creative”.

On sporting events, there are quite alot of runs coming up next year. I am already planning my 2008 calendar with the most interesting thing being 3 marathons coming up for the year of 2008 contrary to a single official one this year!

These are the events. Will it be interesting:

I would like to run more these weeks, but didn’t do so much of the the last week mainly due to projects piling up (besides the weather as well) and of course, having to rush my final year project for the SP 2008 exhibition and open house in the white main Tentage as well. If do, do pop by the Singapore Polytechnic public open house from the 10-12 January to say hi and try out my Final year motion simulator project in action! In the meantime I need to get some rest over tomorrow as my hands are all sore form all the metal work over the last few days (despite it being a school holiday). But man did we make lots of cool stuffs!

Wishing Selamat Hari Raya Haji going to all our Muslim friends out there, and enjoy your public holiday tomorrow everyone!