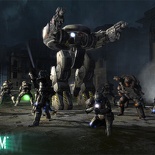 Nope it’s not Red Alert 3, but it’s still form the good ‘ol command and conquer universe. It’s EA Games “Tiberium” first person shooter coming up autumn next year. Though obviously uncreative name “Tiberium”, I guess the peeps at EA mus tbe thinking, “Hey! since we should all know about it’s toxic nature which not only kills and mutates people real well, it makes a cool name for a new game as well!”

I just hope beside the overused “Tiberium” term, it’s not something like C&C Renegade revisited or it’s sequel. I was wishing they put the havoc engine into a better light with so many benchmarks set all around by UT3, Call of Duty 4 and even Crysis. Only time will tell whether this game will set the new benchmark on 3D FPS or simply fall like a flop like it’s predecessor.

CHERTSEY, UK – December 18, 2007 – Electronic Arts today revealed it is developing Tiberium™, a new game that brings a rich, original fiction to life through intense tactical action and visceral first-person shooting. Set in a stunning sci-fi world with spectacular visual effects and dramatic environments, Tiberium takes players on an adventure through a devastated Earth and places them in the heart of an epic battle for control of a powerful energy source.

Tiberium is a mysterious extraterrestrial crystal that shatters the energy output of traditional fossil fuels. It has the power to save our civilization; it also has the power to destroy it. For eleven years, an alien tower has stood dormant, looming like an unholy mountain over a wasteland once known as the Mediterranean Sea. The tower was thought to be a relic of the Third Tiberium War; a devastating war fought for control over Tiberium crystal. It is not a relic. It is not dormant. Deep within the tower, plans are in motion for an alien invasion. This is where the Tiberium adventure begins.

Players step into the shoes of Forward Battle Commander Ricardo Vega and will assemble an assortment of elite squads to combat the global crisis. Armed with an arsenal of weapons including a transforming personal weapon system, multi-launch homing missiles, capital ship bombardments and tactical ion cannon strikes, Vega will lead the fight from the front lines.

Featuring a unique blend of first-person shooting and tactical squad combat, players will control multiple infantry, armour, and air squads as the fight escalates. In Tiberium, Vega is the most powerful presence on the battlefield, and the squads are his most decisive weapon. Players can take multi-squad control combat into single-player or bring the action into online multiplayer battles.

Chris Plummer, executive producer at EA Los Angeles, said: “After two years of pre-production, it is exciting to finally reveal this game and its rich fiction to the world. We’ve put a lot of effort into evolving the tactical shooter experience by taking core gameplay compulsions like commanding, choice and dominating your enemies and delivering them in first-person. Some of the weapons and mechanics are truly innovative for a first-person game. We’re very proud to be part of a project that has the potential to really make a mark on the canon of sci-fi fantasy fiction.”

Mike Verdu, VP and General Manager at EA Los Angeles added, “EALA has a long history of developing groundbreaking real-time strategy games with the Command & Conquer series. That series also originally introduced the Tiberium universe to gamers worldwide. Now, we are growing Tiberium from a simple backdrop to a fully realized universe with its own unique, hybrid squad-based shooter gameplay. This is the birth of a new franchise – we couldn’t be more excited.”