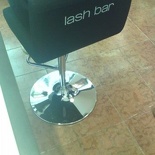 Popped by Bugis today and if you are there, you will come to understand that the traffic lights in front of bugis street leading to Parco is the ultimate display of the phase “no man’s an island” – just think close to 60 people packed onto the lane divider crosswalk island. Unreal! Even the cars are afraid of the human traffic there.

Sheena got herself a lash makeover at the lash bar. Got myself a new Braun Buffel wallet at Seiyu as my old trusty polyester Billabong Australia one is starting to fall apart. That old wallet was one of my most lasting wallets since JC and through Army.

I’ve never really got the hang of leather wallets as they are not as practical & durable given my past experiences with them. Furthermore they also tend to “dog ear” alot after putting them in your pants backpocket. However, I guess it’s also time for me to revert back to a more professional leather wallet instead of a kiddy one. “All grown up already now right?” Just like how my Mum will always put it. 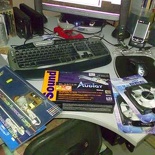 Got an unexpected call apparently, from a very excited Danson about our FYP fabrication almost completed, in fact 2 weeks earlier than expected to be exact, with just a few loose touch ups here and there. Things are looking very good in the time frame we have now.

FYP update
Since I was round the area, dropped by Simlim Square to pick up a few loose items for my final year project, mainly cosmetic items such as cold cathode and LED fans which we PC case modders are accustomed too.

Chatted with few of the Video-pro staff about the shortage of 8800GT 512MB, apparently this had been a very hot item and prices had risen- from $379 to $450 a piece and you can only obtain them from stores (which can still remarkably have them) only when you build a system with processor/mobo with them.

The release of Yorkfield processors, even said to be slated for a January released by intel, won’t be seen in Singapore until half or one month later, so February will be a realistic timeframe for Yorkfield to hit our shores given no further delays. That is of course excluding all possibilities of a price cut too as it’s still fresh and hot from the oven. 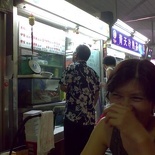 The Singtel shop there have the N95 8GB going at $798 for a 2 year plan contrary to $698 last week as the old N95 are back in stocks, so there no need to please customers who can’t get the classic N95. Disappointingly, the N95 is so common now, it’s nothing special or exclusive owning one now. M1 shops still have their N95 8GB going at highs $800 to $1000+ with plans, not that I have a line with them, but I just wonder where have they been considering other telcos are selling them so much cheaper.

The day out ended in dinner with Mum and Dad at Bukit Merah View hawker center, where we most runners can comprehend as the place where “Mizuno Mount Faber run was held earlier this year”. We tried the Ze-cha aka hawker al-la-carte restaurant there and it was in fact quite good and value for money, we ate at store 01-307 and $36 fed 4 people. Economically cool and good! Now dad is already planning what else to order on our next visit there.