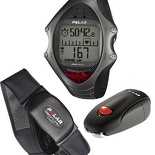 Brought out my RS400sd for a calibration run last Wednesday and it came out rather interesting distances, infact rather different from the distances I measured from google earth. Before my footpod days, I used to use google earth and pacing to gauge distances. However the thing with satellite images is that they are all flattened images, so distance measurements are all linear, ignoring vertical relief and terrain. So technically actual distances for a contoured run can vary to 10% more the actual google earth measured distance. Having a footpod and running computer will not only eliminate the error base don contours but also reduces the hassle of post race distance measurements/route planning.

Interestingly, on the footpod’s maiden run at the Ulu-Pandan park connector last Friday, it read 1.67km on a marked 2km stretch and 1.64km on the return, so that’s a 84% error, far off the claimed distance polar gave at 95% error. Not satisfied, I brought it down to a stadium track and did 400s there. It yielded 340/400m for clockwise loop and a similar 340/400 for anti-clockwise loop, still a 85% error. Bringing the calibration factor to about 1.1925. All these tests are conducted with the S1 mounted on my right foot.

Brought my baby down for my usual Sunday run at the Alexandra park connector, doing a google earth measured 16.7km run with the new calibration factor. This time having the footpod mounted on my left foot, the watch gave a 21.2km distance. Now it seems that the 1.000 calibration factor is more accurate! what is going on?

Initially I wanted to bring it on a treadmill to calibrate, but it turned out that it’s not a good idea to do so as treadmill themselves have to be calibrated as well. (Thanks to the SGrunners for the advice!)

It will be a few more runs and trail and error before I get the final magic number which suits me. So till I get my footpod properly calibrated, distance measurements for my weekly runs are still based off the satellite measurements from google earth: