Looking into the limelight of the events happening recently with regards to SBS transit bus drivers, don’t you think SBS transit is acting too harsh on bus captains now?

Taking the incident this year of the Indian elderly lady who fell from a bus which simply drove off, only laughingly being treated by a driver from a competitor bus company who attended to the large gash on her head which actually revealed her skull under the cut. The indian lady didn’t take much offense on the event, well not as much as SBS transit decision to fire that bus captain who left her.

SBS transit was quoted as “being intolerable” towards such acts and would send off any driver who fails to meet the expectations of the company.

With the exception of yesterday’s article in Straits Times of the school boy being run over. These are considerably minor incidents which should not cost drivers their job. 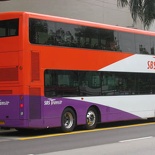 Bus captains are not exactly one who earns alot from work, having a stereotypical background of a low income group. Do you think SBS transit policies will adversely affect the drivers job security and morale? If I were in their shoes, it would be miserable working day by day knowing that the very people who you have to ferry day by day have a higher chance of only shower complaints down your back, besides also being ultimately the ones who will cost you your job with you mess up. And it’s just that one mistake.

Sure there are other jobs which demands more than this. But in the public eye, this is eminent. Consequences of a service orientated job nature? Well its commendable that SBS takes pride in their drivers being professional employees with clean records, contrary to the Drivers of the olden days but there is also to be a fine line defining whats tolerable and not, it’s not just one “goof” and you are gone. 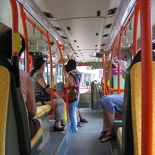 These really got me thinking and shed new light onto how I further precieve bus drivers too. I mean knowing their story, I am one who on a normal occasion will thank the bus driver who stops the bus when they see me running after it, maybe all it take is a smile to make a person’s day easing much their work stresses. Not to mention giving thumbs up to a handful of drivers I know who greet their commuters daily when they board the bus (while most Singaporeans would just stare or never even bother to raise a brow when greeted).

Ultimately it’s the demands of the commuters who paints much of the situation now, let be the standards set forward in the light of tourism. Love it or hate it, it’s simply our mainstream societal pampered and typical stuck-up nature, we are living in the consequences of our actions – a self-imploding crisis of our demands.

The freedom of wheels