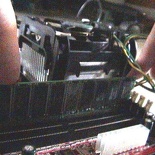 One of my ram modules presumably went kaboom few days ago, as my “workstation” desktop system meter reads 510MB ram instead of 1024MB previously. so I am very much left with 50% of my available capacity with me now. As an analogy there are 2 ways to deal with a faulty car fan belt- you can choose to open the hood and fix the problem or you can simply just turn up the radio and continue driving. Seems that I am choosing the latter, until I can actually find time to troubleshoot.

With hardware prices coming down fast, finally I can look forward during the coming school vacation to get my quad-core system built and move away from the single-core and AGP era to something more respectable. Why quad-core? Well, everybody’s using dual cores now right?

Having used MSI, Gigabtye, Intel and Via motherboards before, this is my first with Asus, so hope they don’t let me down. Estimated price of all these components are $2000SGD currently, in time it will be within my budget not exceeding $1500, with the biggest chunk from the processor/mobo bundle taking up more than 50% of the total price (approx $1100SGD). 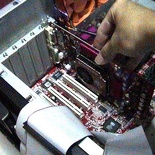 And no, Simlim square hardware prices are actually not affected by the “Great Singapore Sale”. Generally $1000-$1500 is my personal set limit on hardware, not that it’s “expensive” or stingy, but it’s just not worth to spend so much money on something which will be dirt cheap in a few months time, just like handphones, hardware prices will always drop- I’ve seen people spending $200+ on 2GB memory cards or equivalent one year back, and come crying back when it costs only $20 now. My point is that even if you have the cash to spare, it’s wiser to spend it on something else, given the opportunity cost.

Enough said, now here are the things I can savage from current system:

Technically combined, the eventual system is a Quadcore system with 1.5TB Harddisk space with 2GB DDR800 ram. It seems that once you get a decently well built PC casing, you can stick with it as long as the ATX revisions are unchanged, so I generally advise anyone to get a good casing if you DIY and it can even last you a lifetime.

This system should be able to last me another 5-7 years till the next major upgrade, just like what I anticipated with my current system built in 2001, (with the exception of it already on it’s third motherboard!).