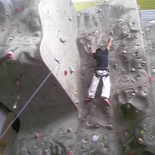 These are the words ecthed into the heads of any climber during the rock climbing sports elective now. A very basic phase I believe, but we won’t be doing any belaying so soon either as theres actually a belayer course & certification to qualify for one, too far fetched for our 2 month rock climbing course. Didn’t touch the inclined wall this week, but scaled the easy wall with a little more challenges – taking restricted paths up the wall only on special taped routes to make each climb more challenging. The finale of the restricted challenge route on the inclined wall involves 1.5m distance jump from one tile to the other right at the top, only so far only seen achieved by our elective instructor, Jinli (she even beat the rock climbing guys to it, shame!).

We also learned that with lives at stake, a carabiner’s life is restricted to that of only 3 direct drops from waist level, where microcracks could form & will only rear its ulgy head when you don’t need it most – during a fall (explaining why all climbing areas have padded floors). There are 2 types of carabiner arm shaped, the inward-bent one usually more suited for ropes & the straight one for climbers. Furthermore, the chalk we use in climbing are not blackboard chalk but those gym free-weights chalk duh!. Besides that, so far we were introduced to the various belaying devices, such as the air traffic controller, a pig nose shaped spring belayer aka Bigger Brake, a GriGri & the figure of 8. You can view a whole list of them here.

Moreover, we also learnt rather interesting knots such as the double figure of eight & another niffy knot (which name I forgot) to attach on the climber’s carabiner side. From then we have to tie all our own lifelines before each climb, interesting…

Once we conquer the wall, Bouldering will be following next in the campus’s Climbing gym.