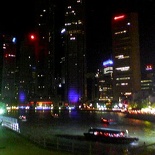 Was a Plaza Singapura to close a deal with a client on a school social networking site, headed to the Simlim area thereafter for lunch with my colleague Andy before dropping by Simlim square to shop for a speed ball & bluetooth module for my laptop. Andy wanted a CRT monitor for his friend who got a new computer but ended up going for an LCD after combing the whole of Simlim & considering that prices aren’t actually that different either.

Ultimately, the monitor purchase was held back due to delays in the delivery of the new Acer computer. Nevertheless I am looking to sell my current 17″ Viewsonic E70f+ Silver & Black Flatscreen CRT for at leat $60 + a Maxel Brand Screen Filter, which Andy might consider getting too. Currently my monitor is still retailing at $178 in Simlim Square presently, so I guess that quite a good offer I guess.

Interestingly, Mum is at it again with all our special evening Dinner, this time at an old restaurant called Ban Seng where we used to frequent, now moved near the Riverwalk area. But later do we know they moved again across the Anderson bridge to the Quayside night pub area. Near the spot where the very first Cyber Cafe opened in Singapore (& where I got to surf while still in primary school with cakes & drinks… thou there is not much difference to that & my habits presently).

Overall the food was ok till the fish dish came, the fish meat was bouncy & hard, though cooked. Like as if the fish was caught & cook while still tensed & contracted in shock. They refused to take the fish back so, a move they can make but won’t see us a a returning customer so soon either. So much for an early birthday celebration dinner for dad! Chilled out around the area (besides grocery shopping at cold storage thereafter.. duh) before calling it a night.