Home Technology Computers Not CoreDuo after all 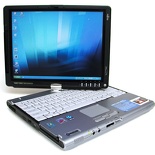 With CoreDuo laptops slowly making it’s way into the market, apparently some tech-savy consumers like me is fad up in waiting for such new computers to hit mainstream, whether its a new laptop for my sis or a new tablet for me.

It just takes too long for any new processor release to come out, especially when you urgently need a laptop for school.

In that limelight, I guess I would not wait for Fujitsu to launch the new coreduo tablets (aimed around end this year) & get the year-old Sonoma Laptops, mainly due to 4 reasons:

But won’t doing so be an insult to all my research? Not to mention time spend into spotting of good hardware which can last a consumer? Personally even if that is so, the bad out weighs the good I believe. I guess when you need a laptop now, the more important thing is to get it when you need it then.

The Laptop I will be getting for Sheena will be a 2Ghz Centrino 760 Laptop with 1GB ram, DVD-RW writer & ATI X600 graphics card. Despite being 1 year old tech, its still quite a powerhouse I can say, more than sufficient to last her a long time for multimedia work, casual gaming & into the Windows Vista operating system with Aeroglass enabled. I won’t mention on the brand & price here, as it meant to be a surprise for her, so as mum wanted.

For me, I will be going for the very much slower (1.73Ghz) yet funnily, much more expensive Fujitsu T4020 tablet PC. I had been eyeing this model since last September, hoping that Fujitsu releases a successor to it, but I guess even if they do, even with different specs (Current Sonoma, Intel GMA900, compared to the speculated new CoreDuo, Intel GMA950 model, & considering my 4 points listed above) both models still sux ass at 3D gaming, but more than enough for regular school work, lectures & photoshopping/programming so whats the point waiting? Moreover, if I get a tablet now, life will be so much easier for me at school & work. Not to mention able to start on my online webcomic, Ratz!