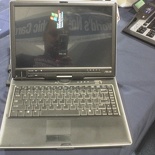 These are the things which came to mind after a short chat with mum over lunch today at BM central, when considering the purchase of my laptop before school reopens. Maybe it wasn’t the calories in the popular Hainanese Chicken rice we were having which sparked my mind going on the matter.

Few months ago, I was seriously considering the Fujitsu T4020 as my primary laptop, till the release GMA950 & dual core laptops, then I started wondering whether I should still put my $3999 on this Fujitsu & be 2 generations old in 6 months time when dual-core 64-bits & Window vista comes around Jan next year.

Any layman given this problem will definately recommend to get a laptop when you need it, because technology always moves on. So as they think but I need to make my purchase worthwhile, not to mention able to last & be “technologically compatible” for generations to come. Considering that laptops are not as upgradable as their desktop counterparts.

On a research front, I am considering the Asus A6J Intel Core Duo laptop with 2Ghz T2500 Yonah processor, Radeon X1600 512MB HyperMemory, 100GB Harddisk, 1GB Ram, 1,3MP Camera for $2700. Another possible candidate is the Acer 8204WLMi (A brand which I usually don’t patronise) having everything the Asus A6J has but a 1680 x 1050 screen, VOIP Bluetooth phone, same carbon fiber body & few more extras for an additional $1299.

But all these are laptops! I had outgrown laptops 3 years ago & am more geared towards PDAs & tablet PCs now, but the 1 year old Toshiba Tecra is still retailing at $4222 & the New Yonah Toshiba Portege m400 is no exception at $4020 too (called Toshiba Singapore to confirm the prices last week). I can choose to get the old Sonoma T4020 now but that would definately be an insult to my research & homework just for impulsive wants. On the forefront there is the unreleased Asus R1F Tablet PC with a Core Duo processor, 13.3″ widescreen but unspecified on board graphics, due to be released in Spring 06, (which I hope won’t be too long for now).

Asus is reputable being an ODM for Sony, Apple, JVC & Dell. Fujitsu however, is notoriously slow to release successors or refreshes to their laptop line. Let be a speculated refresh of the T4020 around August/September this year, judging how long they take to release their Sonoma tablet in August 2005 when the chipset was avaliable in Jan that particular year.

As the saying goes: “Good things come to those who wait”
But next semester will have 2 computer demanding modules, haiz Fujitsu & Asus quickly release your new Tablet PCs… dunno should I still wait or get one now…