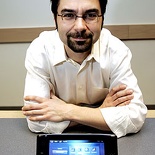 Apparently, Microsoft is coming up with a new line of UMPC (Ultra Mobile Personal Computer), code-named Origami. It will be a seemless blend between our current PDAs & tablet/notebook PCs. So far the closest we had seen embarking on the concept previously was fujitsu with their ultraportable & highly successful Lifebook P1510.

The only thing is that the UMPCs will run a rather new & unique software allowing a radical new way to input data, different from current Tablet PC/Personal Computer OS as well.

From Samsung
The Q1 from Samsung combines a laptop computer with a media player. It weighs in at 1.7 pounds.

Samsung’s device, the Q1, will use Microsoft’s Windows XP Tablet PC Edition operating system. It is a product of Microsoft’s so-called Origami project — an effort to shrink and redefine the laptop, while bolstering the company’s software sales for new hand-held devices. Asus will also produce a version.

“This is basically a small but powerful laptop computer that is also a sophisticated entertainment device,” said Patrick Pavel, a Samsung product manager for Germany, who showed a prototype of the Q1 on Wednesday at the Cebit technology fair in Hanover.

The Samsung device is a flat black rectangle that weighs 1.7 pounds, has the dimensions of a DVD box (about 9 inches by 5 inches) and is 1 inch thick. The viewing screen is 7 inches diagonally, more than twice the size of most personal digital assistants or Internet-enabled smart phones.

Microsoft had launched their UMPC website up recently, spearheaded by the Ultra-Mobile PC team, you can check out the details on the following links:
Microsoft Press Release
channel9 1st looks