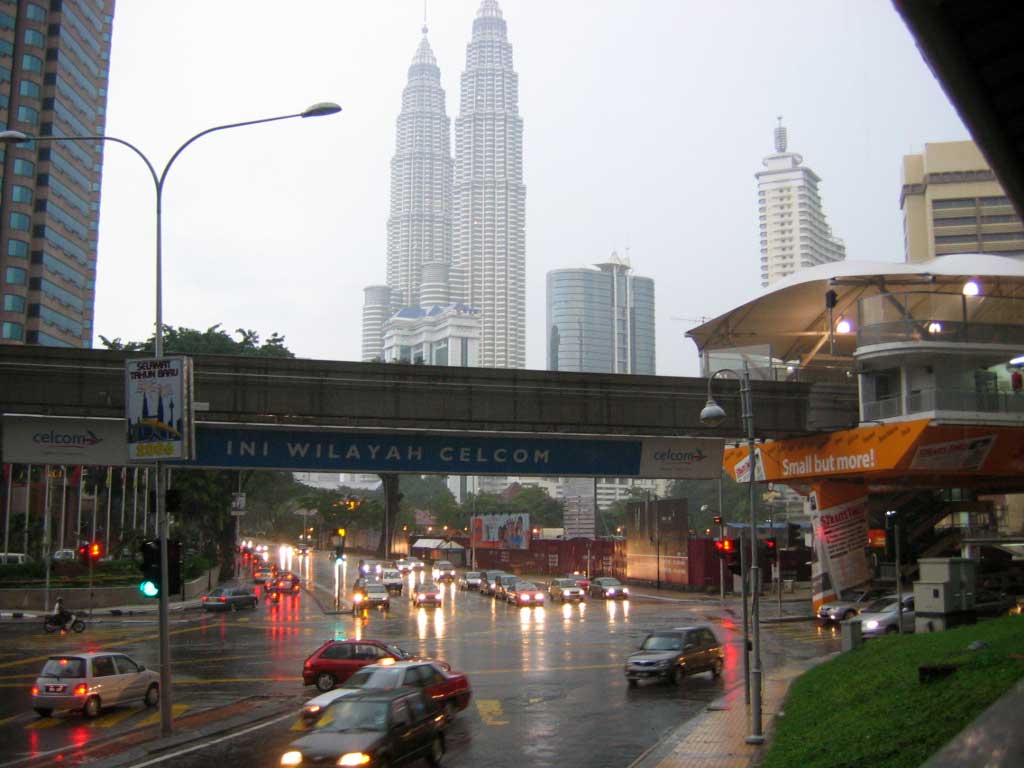 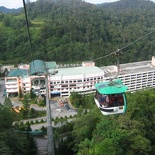 25th Dec 2005- On the way to KL
The morning call didn’t wake us, so was the phone call from mum. But dad at the door did. Checked out at 8am for breakfast at the themepark hotel happy valley mini cafe before heading to the Cable cars for the connecting bus trip to KL (10.30am). There is a short break at the usual tour shop near the batu caves, then it towards swiss garden where we are the first to alight again from our bus. As the only family too!

KL Swissgarden
One room was ready by then so we checked in to dump our bags before heading for lunch. The room is what a basic five star should be. With proper tv position, bathtub, unlike our so claimed ‘5’ star hotel in genting. There’s even a connecting door between rooms, usually not looked upon & found in older hotels & this one has it! The lift works like the one in berjaya too- requiring access keys to access guess floor levels- all for security.

KL city after 5 months since last visit
Nothing much has changed. 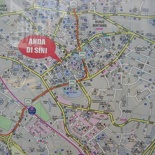 We’re somewhere in there! 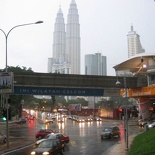 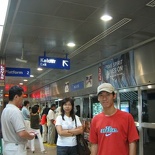 We started walking in search of the putra mrt station to KLCC petronas only to find it in some old abandoned-like structure under construction. We went in favor of the free shuttle service provided by the hotel & went for lunch at a nearby backlane hawker to eat & pass the time till 2pm, the shuttle timing. Our total orders of 5 dishes for 4 (as usual I had more of a little more) costed not more than 15RM- the price of 2 single scoop icecream we had the day before. Brought some potato bread for a snack together with a slurpee at the nearby 7-eleven before heading back to hotel for the free shuttle… 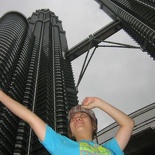 Petronnas
It was raining heavily at the hotel around 2pm, we were expecting a bus, by it was a shuttle van (a relatively new kia min-bus) instead that we took through the busy KL traffic to petronnas towers, it beats taking the train or walking there too. Furthermore, it added a more personal cozy touch, not mention being zippy in urban traffic as well. The weather slowed to a drizzle when we arrived. We started raiding the shopping centre from top floor down. Namely parkson grand, isentan and few reputable boutiques such as AX, EA, Mambo, etc. Golden village even has a cineplex there. Sheena went crazy over the jigsaw puzzle collection a particular store has over the ones we have back home, not to mention the book varieties at the kinokuniya as so as she claimed. We had a short break at the upper level food court. Before finishing up on window shopping & heading out front the tower for photos, then rain came in on us again. But it got to catch us, cus we are downunder KLCC hading to chinatown.

Putra
Taking the putra has a hidden goal of giving sheena the KL subway experience. But it seems that putra is going in favor of some new wireless payment scheme simlar to our ezlink, with that comes the increase in number of spoil or malfunctioning ticketing machines due to the possible facing out of the magnetic card system. A bad move though with lots of long queues & angry tourists & locals. Their monthly pass system is kinda unique too- all you need is just to flash a piece of ‘official paper’ for free entry. We transited from wangdi to the monorail station where its zipzip direct to chinatown thereafter. 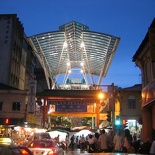 Chinatown
We made our way from wangdi to the monorail station for a rough 1.60RM trip to chinatown. It seems that I always end up buying the most stuff there with a nike windbreaker & a pair of dc shoes, for cheap cheap! I could have got an additional billabong surfshorts if they have my size.
Dinner was a sumpterous 7 course zhe ca meal at a food centre called tang city food court. & its costs 70RM (30SGD in total for 4 plus drinks!)

We chanced upon a small store selling handmade wire noveties made by a wheelchair bound uncle. Personally this is so much better than street beggers or those who goes around bugging dinners for money. With the exception of street performers too. My point is you want money, work for it, then I will be more than willing to contribute at least I see effort, why beg when you are able-bodied, & being able to work while not doing anything about it. Thus making us purchasing 20RM of handmade gifts from this disabled uncle.

We initially planned to take the free shuttle service from the chinatown branch of swissgarden only to find out that we have to wait 45mins for it to come. So we ended up making our way back to monorail on a trip back to the hotel. Its one of the times when you simply appreciate having a monorail station in front of your hotel, but that’s only when we are not staying at berjaya this time round. Started using my scout navi instincts back to the hotel the moment we landed at the berjaya monorail station from chinatown. Later do we know that dad’s lead is always wrong (not to mention his sense of direction too. Aother strike out for him again when I pointed everyone to where they can actually see the hotel again, that’s when I know my instincts (which served me well again) used in the army are largely useful now too. Tomorrow, berjaya revisted!
(end blog at 11:58pm)