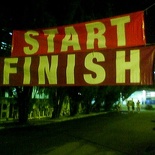 Met up with Erick, Darius & the rest of the track gang at Dover MRT to gather & make our way to NTU , where the annual X Campus run was held. We alighted at Boonlay where we took service 179 to the campus itself. Estimated each college & polytechnic sent in at least 1 team to compete, 2, being the norm. The race was great & I guess I clocked in one the best timings since training on the actual grounds itself. NUS came in tops this year, on the invitational category where we belong in, though we all finished, Coach was a little disappointed with our results as quite a few of us didn’t performed as expected to be. In fact afew performed of our teammates came back with stitches, etc where coach ruled “need more training”.

Overall, I clocked in at 31mins 24seconds for the 6.6km run. Not the best, but I tried my best & very much made it in the top 40% percentile, beating even the NUS track girls team, with their guys team being the exception. & man I guess the feeling of overtaking 5-8 people in a row on the downslope is super shoik! haha on the notorious 3rd upslope in the run near building N1.