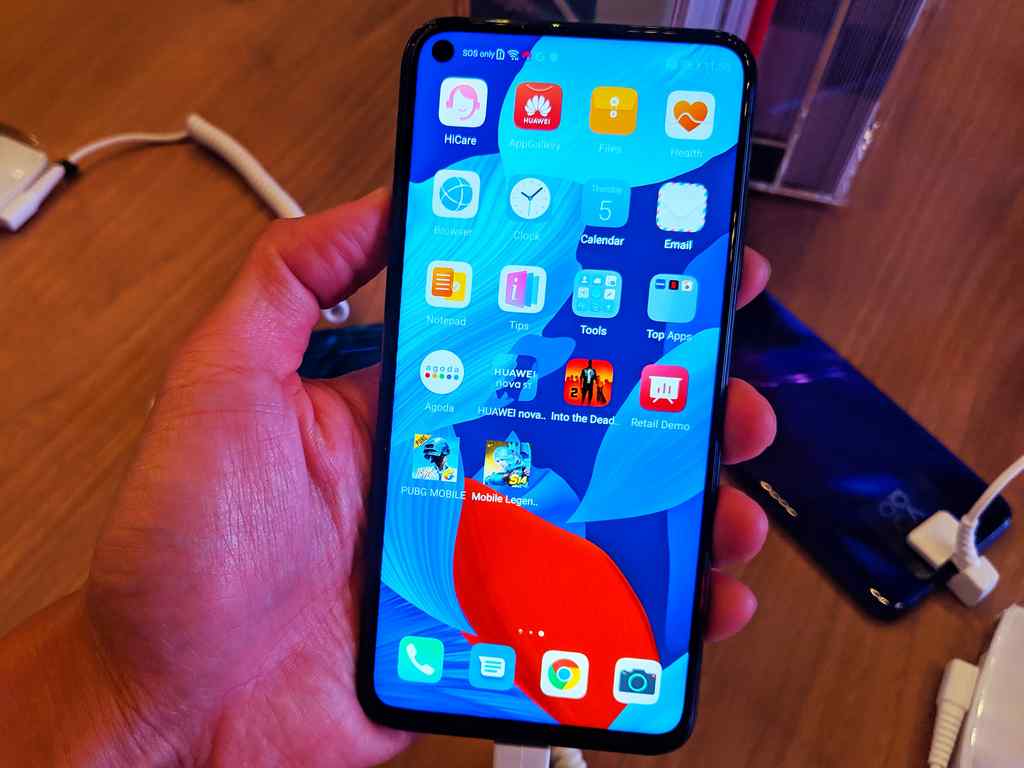 Huawei Consumer Business Group launched their newest mid-tier smartphone, the Huawei nova 5T. It debut was in-line at COMEX 2019 in their E-sports Festival Asia arena, which Huawei is title sponsor. Let’s check out the phone in the flesh.

A close look at the specifications does not disappoint or scream mid-tier in anyway. You get the same flagship Kirin 980 AI processor as found on last year’s Huawei P30 Pro flagship. Furthermore, this is Huawei’s most powerful consumer mobile processor to date. This processor touts and octa-core architecture comprising of Two 2.6 GHz Cortex-A76, Two 1.92 GHz Cortex-A76 and Four slower clocked 1.8 GHz Cortex-A55. The beast is paired to a Mali-G76 MP10 GPU.

It provides a full-frame gaming experience and reduces latency for slicker gameplay. Hence, allowing you to play more graphically-demanding games with boosted frame rates without sacrificing battery life. The system on chip power consumption is expected to be reduced by 10%. It might give you more runtime on its 3750mAh non-removable battery. Mobile games such as Fortnite, PUBG Mobile, Vainglory and Arena of Valor are compatible with by GPU Turbo 3.0.

This combination is paired with near-flagship specs of 8GB system RAM and 128GB of internal storage. Also, these top-tier specifications are quite unheard of in the sub $600 price segment. The closest phones we see prices in this range comes with 600 series snapdragon processors like that of the Vivo V11 and Google Pixel 3a released a few months back.

This could signal hints of Huawei potentially moving up from the Kirin 980 to the Kirin 985/990 which is rumoured to be similarly based on the 7-nanometer manufacturing process.

Moreover, on the software front, the phone comes pre-installed with Android 9.0 (Pie) re-skinned using Huawei’s EMUI 9.1 interaface. However, this could be the last Huawei phone to feature Google services out-of-the-box.

The phone body is clad in cheap-ish plastic, which makes it light and sits under 174 g. it is available in three colours, Black, Crush Blue, Midsummer Purple. With the blue being the most eye catching in my opinion. Dimension wise, the 154.3 x 74 x 7.8 mm frame houses a 6.26 inch IPS LCD capacitive touchscreen with very minimal bezels (~84.2% screen-to-body ratio). Also, the 1080 x 2340 pixels 16M colors screen has a pixel density of 412 per inch, putting it somewhat in “retina territory”.

Furthermore, the left of the phone is mostly empty and all the buttons. This includes the power button with integrated fingerprint sensor and volume rocker on the right hand side. Feature-wise, it is almost like a larger Huawei P30, with an additional camera.

Sadly, there is no headphone jack on the phone, which is supposedly a selling point in mid-tier phones and markets which had not transitioned to wireless audio.

The Nova is equipped with four rear AI cameras that support high-definition, ultra-wide-angle, macro, and depth of field photography. The phone is able to capture rich and clear images within a single shot in all scenarios, from vast landscapes to close-up shots.

However, it misses out of the critical 5x telephoto 8 MP, f/3.4, 125mm periscope lens. In place is a smaller 2 MP, f/2.4, 27mm (wide), dedicated macro camera and a 2 MP, f/2.4, depth sensor. You get the usual bells and whistles of a LED flash with software HDR, panorama. The phone is able to shoot 2160p video at 30fps, likewise 1080p@30/60fps paired with powerful automatic video editing capabilities right on the phone.

I can guess it was a deliberate decision for Huawei to keep the current P30 Pro (and potentially, the upcoming Mate 30 series) the king of Huawei’s Photography range.

Also, the Nova 32 MP front single selfie camera is targeted at social media users and content creators on the move. It is an f/2.0, 0.8µm lens and able to capture 1080p@30fps video. This includes capturing minute detail with unmatched sharpness, right down to fine strands of hair in selfies.

Moreover, Huawei shared that their AI-powered image semantic segmentation and partition optimization technology. It present details in the photo and balance the exposure under all lighting conditions. Here, it combines photography date from their 48MP HD main lens, 16MP wide-angle lens, 2MP macro lens, and 2MP bokeh lens. This together with their AI-enhanced photography technology (AI Image Stabilization, Auto Exposure Lock and Auto Focus Lock) ensures that captured images are sharp and detailed.

Notably, Huawei’s is still strong in the consumer market. Their products and services are available in more than 170 countries. They are used by a third of the world’s population, ranking second in the world for mobile phone shipments in 2017.

All in all, their junior flagship smartphone, the Huawei nova 5T is well-placed to dominate the mid-tier market. It boasts flagship features at an affordable price. The phone is available now in-stores retailing at a recommended retail price of $598.