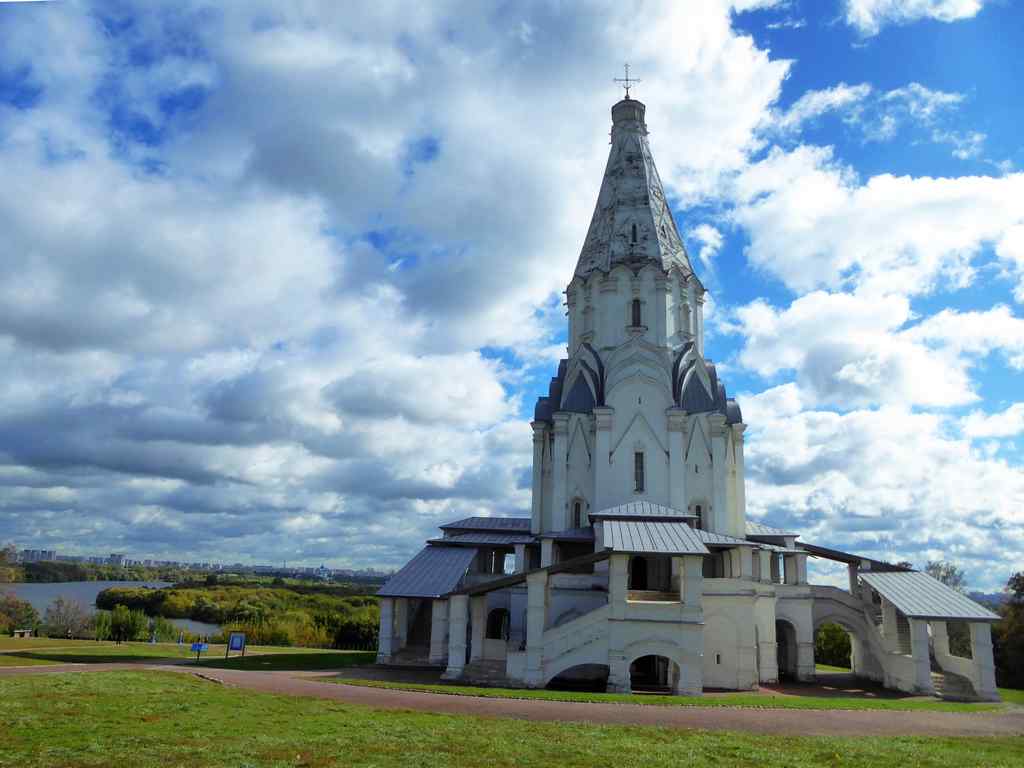 Getting to Kolomenskoye estate involves a short a walk from the Kolomenskoye Metro station. The metro is the best way to get to the historical UNESCO site.

At Kolomenskoye metro station!
Above ground
Walk though a neighborhood

Also, the entrance to the park is a short 10-15minute leisure walk on a pathway past a high rise neighborhood from Kolomenskoye Metro station. The path is nicely shaded with trees and runs alongside a major road. The park gate entrance and visitor center greets you after a small commercial shopfront area.

The public park is open daily from 8.00am to 9 pm. Moreover, the park’s Museum expositions are open daily and closed Mondays. Admission to the park is free.

A walk in the park
Up the hill!
Onward to the castle!

Notably, Kolomenskoye was first mentioned on the history books from the mid-14th century. The first historical records mentioning the village Kolomenskoye dates back as far into the 1339. Additionally, it was also found in the testament of the Moscow Grand Prince Ivan Kalita.

The site has historical significance in Russia’s history. The park was home to several palaces and was the favorite residence of many Russian rulers. Notably, legend fore told that Peter the Great was born right here in Kolomenskoye. Interestingly, the local oak trees seen growing here called Petrovskiye were named after him.

Moreover, following these events from 1923, Kolomenskoye was turned into an open-air museum of Wooden Architecture. In additional, additional wooden buildings and monuments (from the 17th to 18th centuries) were transplanted right here in Kolomenskoye. They come from all across Russia forming part of what is the open-air museum today.

The Kolomenskoye park is an active archaeological site here, you can find a couple of old building ruins. It is not uncommon to find historical archways and ruins littered throughout on your walk through the park. Moreover, Kolomenskoye used to be the site of a beautiful wooden palace. Also, the ensemble of the Tsar’s courtyard was formed during the 1670s right here in Kolomenskoye. Moreover, it represented a complex of structures which included a majestic wooden palace. Also, it has its links to Alexei Romanov who reigned during the era.

Furthermore, unfortunately, this wonderful creation no longer exists. Little do people know back then that though wood is a very easy material to work with, it is not necessarily the hardiest material too.

Tsar Alexis had all the previous wooden structures in Kolomenskoye demolished and replaced them with a new great wooden Summer palace. In 1667-1671 Tsar Alexei Mikhailovich built a huge wooden palace in traditional Russian style of that period. It was built using drawings of its predecessor.

The Eighth Wonder of the World?

Interestingly, the castle was widely decorated with rich carvings and interior paintings. Moreover, it was touted as the Eighth Wonder of the World. This is given how massive and unique it looked like in the era.

From historical records, the palace has fanciful roofs, with large domes seemingly taken out of a fairytale. Moreover, the castle is notorious for its complicated interior. It has a huge maze of intricate corridors comprising of having as many as 250 rooms. Notably, it was the favorite residence of Tsar Alexis

Despite being deservedly considered a masterpiece of wooden architecture of the epoch, the castle too didn’t stand much of time. Following rising cost of maintenance and upkeep, the dilapidated palace, sitting in the shadows of it glory days was disassembled in 1768. Furthermore, the moving of the Russian capital from Moscow to St. Petersburg during the 18th century greatly diminished the Tsar’s estate role as an important place of state.

Henceforth in neglect, most of the palace original basement overgrown and covered with century old vegetation. Moreover, two centuries later, only up to the recent 1990s, the palace was partially reconstructed. Here you can find the only remaining part of Alexander I’s destroyed 19-century palace. Today, only the stone foundations of the castle remain. These can be explored at the historical site in the park today.

Church of the Icon of Our Lady of Kazan

Furthermore, there are few active ancient Churches you can visit during your stay in Kolomenskoye. There is the Church of St John the Baptist and the Church of Our Lady of Kazan. The latter is devoted to the Lady of Kazan. Also, the church was built under Tsar Aleksey Mikhailovich in 1644. Here, it served as a family chapel.

Moreover, the church had undergone several upgrades. From year 1651, the church original wooden building was rebuilt and replaced with the current stone structure we see today. This newer structure was connected to the Tsar’s palace by a covered passage.

Dome of the church
Inside
I spy with my little eye

A white staircase leads you to the church holding areas which lead into the halls. Flanking the central hall are smaller ones used to house various religious artifacts. Notably, the building interiors are decorated with rich coloured carpets and fabrics. Services are held all the year round.

The show boy of Kolomenskoye Estate is the Ascension Church. This is also what flocks of tourists come here to visit. The route towards the Ascension Church brings you through a shaded forest with a straight path. You know you had reached the Church as you enter a vast clearing on the top of a hill past a double door gateway. This is the Church grounds front gateway building.

Interestingly, construction of the Church of the Ascension started on 1532. The site here as what is known as the Imperial estate of Kolomenskoye in Moscow. Moreover, it was built to celebrate the birth of Tsar Ivan IV. Humorously, Ivan the IV is the Prince who otherwise came to be notoriously known as “Ivan the Terrible”.

Construction of the church was completed on 1535. It stands squared on a nice manicured green open field. It overlooks from the top of a hill, a forested area with a river running through. Additionally, you can get pretty good views of the river and adjacent part of a Moscow city skyline.

Moreover, looking on the Church exterior is a remarkable tent roof. This stone roof rises from an octagonal base crowned by a series small kokoshniks (a semicircular keel-like exterior decorative element). They are stacked on top of each other from a larger base of multiple tiered kokoshniks.

Also, it spots a traditional wooden tent-roofed structure building using a stone and brick substructure. This reference architecture had a great influence on the development of future Russian ecclesiastical architecture leading from the 1600s.

Moreover, the sights here are rather chill and tranquil, with the history of the church giving its UNESCO status. The view is fantastic which justifies the trip there. Moreover, for about 500 Rubles, you can get tickets to access the interior of the Church.

Yep we are at the right UNESCO site!
Tickets to enter!
Basement of the church

Exploring the inside of the Ascension Church

Furthermore, you can get up close and personal being inside the building. There is a ground floor gallery housing an art exhibition and an upper floor reached by a series of external staircases surrounding the church exterior. The Ascension Church is one of the earliest examples of Russian architecture.

Staircase up
Entering the church
What do we have here

Moreover, the church being the first tent-roofed church constructed out of stone material does have some drawbacks. The first is the real lack of interior space. While the tent roof allows for really tall vertical structures, allowing for a vast 41-metre high ceiling, however, in order to support the stone roof, the structure walls have to be up to 3 meters thick.

Henceforth, structural strength is large a proportion to wall thickness. This is due to the abscence of reinforced concrete back then. Henceforth these thick walls eat into interior space.

Wall murals
The roof interior
Sections in the small interior

The central interior houses a small Church altar complete with walls filled with Murals. Exploring on, there is an elevated walkway surrounding the second floor of the church.

Great views from the Church

Moreover, there is a “Royal pew” at the eastern altar part of the gallery. Also, this pew faces the Moscow River which you can see from the gallery. It is shaped like a throne with a white-stone ciborium (a canopy over an altar) above it. You can get really good views on top of the structure on the hill from up here.

Structurally, the church is safe, well restored and maintained. The walls are solid and definitely stood the test of time over the centuries. Inside the park, you get a couple of open green spaces on a hill, as well as a couple of old archways and door entrances into the various sectors of the park.

A first in ecclesiastical architecture

However, this method of construction in the 1500s was an extremely innovative advance in Russian Orthodox Church design. Also, this specific construction gives buildings a feeling of spaciousness which was never achievable in buildings of the era.

Henceforth the Ascension Church exerted a profound influence on developments in ecclesiastical architecture. Additionally, this has subsequent influence over a wide area of Eastern Europe.

You are good for a visit to the Kolomenskoye estate and Ascension Church for about 3 hours, and probably half a day if you were to explore the entire open-air museum.

However, though there isn’t much left of the original Tsar’s Courtyard and palace, the historical significance of the Ascension Church and open-air museum is one worth visiting for.

All in all, the park has a pleasant feel. It is complete with nicely shaded forested areas and apple orchards. Kolomenskoye offers spectacular views over the city and Moscow river– trademarks of what you can expect the UNESCO site to offer. 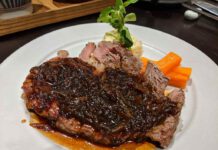 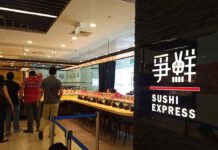 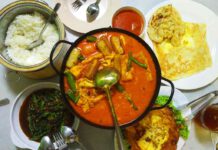 Shaun - Friday, January 31, 2020
Old habits is boutique and cafe serving a range of western and Italian fusion dishes with a pretty cool ambience to boot. They are...

Shaun - Monday, September 28, 2020
Beard brothers BBQ is a casual dining halal Texas-Style restaurant located at Petaling Jaya, Selangor, Malaysia. It is great for a trip when you...