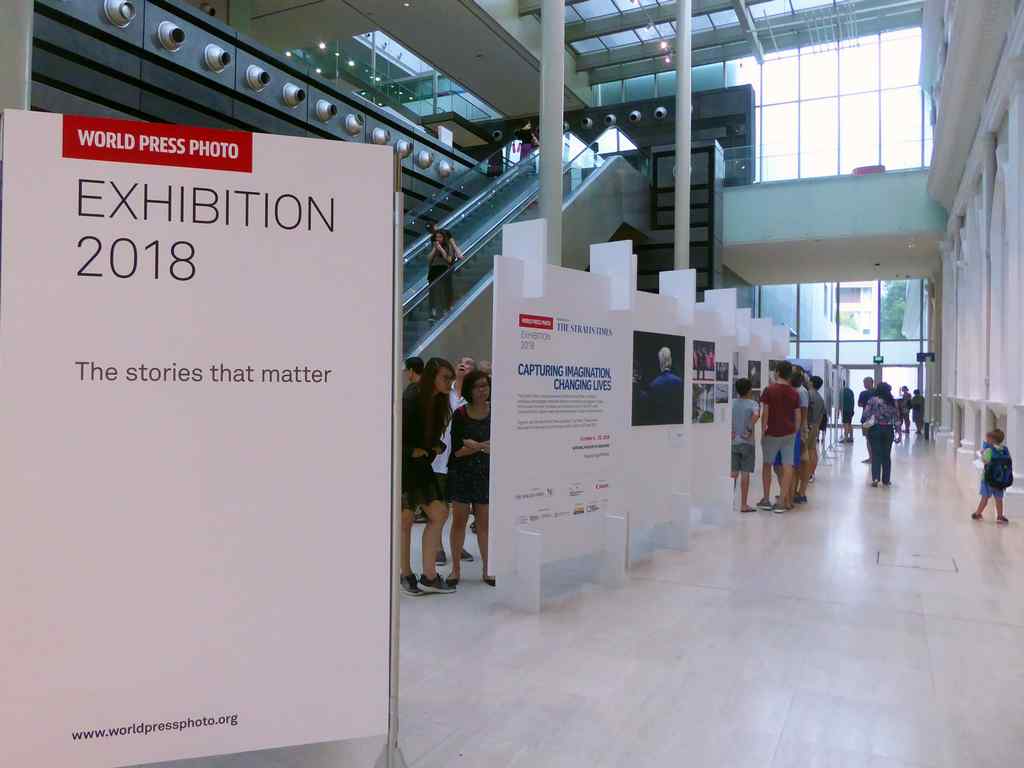 Furthermore, the exhibitions span two floors in the rear atrium of the National Museum building. The top floor is accessible via the museum’s main escalator. Since they are located in the open public sectors of the museum, you can simply just walk-in without having to register at the counter (unless you wish to enter the museum permanent galleries).

Similarly, this 2018 Exhibition sees a recollection of breaking news captured by photography. Moreover, this year sees over 160 photos on display by 42 photographers. Additionally, on a little history, the World Press Photo Foundation was founded in 1955 and is based in Amsterdam. It is an independent non-profit organization widely known for holding this annual press photography contest.

Furthermore, the photos were judged by an international panel. This is based on the criteria of composition, impact and relevancy to major events which happened in a particular time frame (2017 in this instance).

Additionally, the displays cover a broad range of photographic news topics such as the Environment, Nature, Daily living (lifestyle news), to Terror attacks (e.g. London car attack, Las Vegas shooting). If you are in-tune with current news, particular those from 2017, you will recognize many of the published photos on display. Areas of Nature includes Environment and covers sustainable topics as well as agriculture.

Moreover, due the violent mature nature of some photos, certain gallery sectors are enclosed with warning signs of the content ahead. However, all sectors are still open for all. Also, you may recognize these photographs similarly licensed for use in many major new agencies through AFP, Reuters or even National Geographic for instance.

Greeting you at the start of the photo exhibition is Straits Times (ST) very own local showcase. Notable photos having international acclaim include the Singapore Kim- Trump summit which took place last June.

Moreover, showcased upfront here are the works from our very own local ST photographer Kevin Lim. You can see his shot of the iconic handshake between President Trump and Mr Kim in the courtyard of the Capella Singapore hotel on Sentosa. Also, his photos were published by The Daily Telegraph, The Courier Mail and Time magazine.

Furthermore, additional notable photos include Cadillac one (the beast) as well as the taking off of Airforce one flanked by a background of HDB flats. Covering the sporting front encompasses shots of the recent Sea Games held in Indonesia as well as the Singapore GP formula 1 race just last month, with Lewis Hamilton taking the win. Other interesting displays includes a scene comparison between places in Singapore at different times of the day.

Additionally, on showcase too are several long term photography projects. An example includes one by Carla Kogelman from the Netherlands. It covers the social lives of two girls over a 5 year period.

Adding to the display too are battle of unrest in the middle east, including those captured in in terror-contested areas. Also, there were photos not commonly published of the Las Vegas shooting from the Mandalay Bay Hotel in the US.

Moreover, adding to the photo is one of illegal prostitution industries in Russia, as well as children jockeys in Belgium. I was also awestruck by a fantastic overhead photo by Erik Sampers. It depicts hundreds of runners pounding their feet into the endless dessert the Sahara marathon (known as the Marathon des Sables).

All in all, the photos are impact-full and puts in perspective the reality of the world happenings the past year. You do not really need any narration in the photos. The composed photos enshrined the emotions of the subjects well within the photos. The message delivered through a photo speaking a thousand words of the scene as depicted. It is a side of photo journalism you seldom see in the news.

Catch the World Press Photo Exhibition at National Museum. It is located along Stamford Road near Bras Basah. The exhibition runs for the month of October from 6th to 28th, with the museum open from 10am to 7pm daily. The closest MRT stations Bras Basah and Dolby Gaunt station are within walking distance. Admission is free.