Kumar stands up for Singapore is a Musical which runs at the Esplanade from 22nd – 26th April 2015. The “Musical” is largely an extended stand up comedy where Kumar will blabber over anything under the sun, from current issues, politics, racial and LGBT topics to Singaporean xenophobia, often with a Singaporean twist which is hard to beat. The theme revolves about the 5 Stars of the Singapore flag, with Kumar himself taking a different persona (by the makeup room) and dress theme (costumes by Frederick Lee) on each star, with a unique costume for each segment too. I won’t include any spoilers as you have to watch it to experience it yourself.

Directed by Selena Tan from the Dream Academy (you may remember them as the production company which brought you the Dim Sum Dollies) and written by “Mr Miyagi” Lee. The musical fills nicely a void in the local mid-year musical calendar out of Dream Academy’s usual year-end schedule to bring you Kumar as a Superhero- labeled as Singapore’s very own STB (Singapore’s Top Bapok) and you bet your bottom CPF dollar he does! 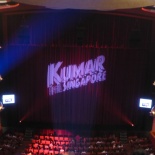 Kumar stand up for Singapore! 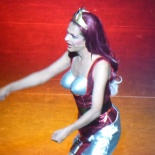 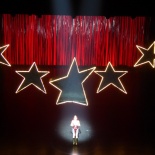 I had been to regular Kumar night stand-up comedy shows and he often never fails to amaze me with this humorously crude sense of humor. The thing I really like about Kumar jokes is the non-discriminatory style he has to his jokes, he treats everyone equal- by humorously equally insulting everybody/all the races, including himself. I have been always a long supporter of Dream Academy, always catching their Crazy Xmas specials as well as the recent History of Singapore series, and it is nice seeing local artistes coming together with a strong and supportive audience. The show on my night was almost a full-house. It’s also pleasing to see that there are people in Singapore who actually have a sense of humor to laugh at the issues of Singapore and even themselves as a whole.

I will recommend the Musical, and also an excellent show to wind up after a day and laugh yourself out. The musical however has a rating of R18 for mature jokes (i.e. content restricted to audiences 18 years and above) and to people who actually have a sense of humor. The entire “Musical” is approximately 90 minutes, with no intermission, with Kumar himself exclaimed possibly the longest duration he had ever spoken in one show sitting.

Ticket pricing starts from $46 from Sistic and if I am not wrong, you get a further 20% discount on Category 1 seats if you are a returning patron who caught previous Dream academy shows. Only 7 shows will run in total till this Sunday, with weekday shows at 8pm, and the weekend having both matinees at 4pm and regular 8pm night shows.

Come laugh with KUMAR as you discover the true meaning of mari kita!