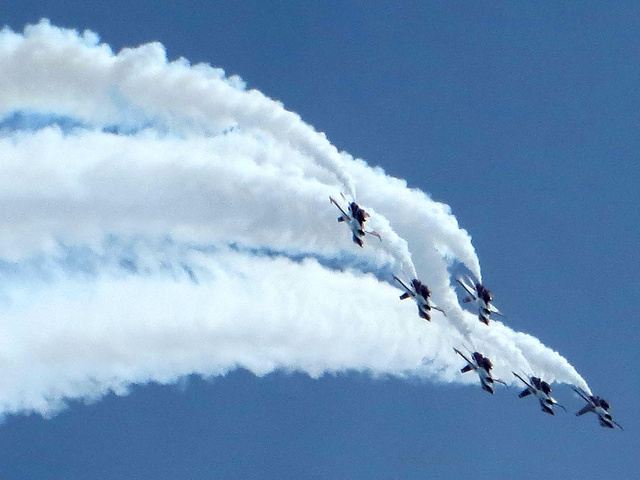 The highlight of any airshow will of course be the aerial display. Highlights this year will include the RSAF Black Knights who will perform acrobatic displays with spirals and not frequently seen, a chaff dump while while in mid-flight (which members of the public will refer to as plane “fireworks”). The Black Knights together with the South Korean ROKAF Black Eagles will perform aerial performances with multiple platform. Expect solo aerobatics too performed by the US, Australian Airforce and Russia, featuring notable aircraft such as the C-17, USAF F-16C and YAK-130. Displays on trade show days run from 12:30pm – 1:40pm daily while public days features two display with hour long shows starting at 10:30am, and a half hour display starting on 3pm. 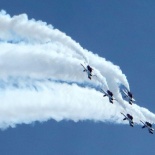 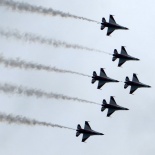 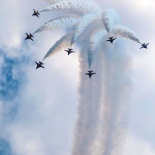 RSAF Black Knights aerial display
The Black knights team comprise of a team 6 pilots, each having over 1000 hours of flight time before qualifying for the role, of course not forgetting the 7th Black night, the commentator. Moves performed will include the close passes, loops, boomerangs, “arrow” spin formation, and “slow stall” glide. The Black knights is also one the few aerobatic performance teams in the world which flied combat-capable aircraft (contrary to trainer aircraft) in their performance. This display segment ends with a victory break with chaff and flare dump signifying the finale of the performance. The Black knights segments last about 10-15mins, with each full aerial show will last about 20-30 minutes average, often completing well within and early in the hour-long slot. 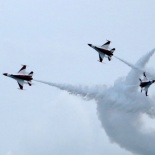 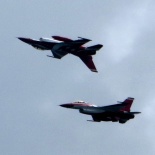 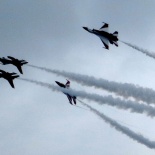 The show area are wide open concrete areas offering unobstructed views of the skies and open sea front where the planes will be situated, just remember to pack proper hats and sun protection. The use of umbrellas as sun shades is not recommended often shunned upon as it hinders movement in crowds and obstruct the views of others behind you. Visitors who are sensitive to loud noises are advised to put on some form of ear protection. Trade visitors invited to the chalet areas (Lockheed, IAI, etc) are able to catch the show unobstructed and away from the crowd at the comfort of the roof top viewing areas in their respective chalets.