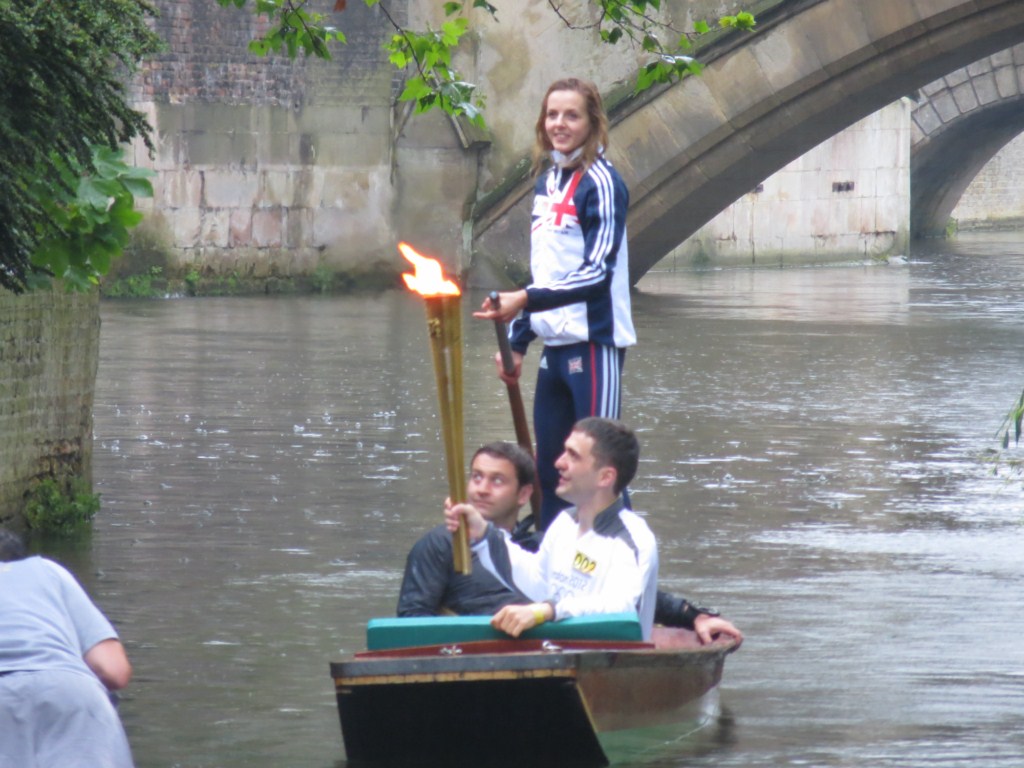 The Torch relay this Olympics involves bringing the torch through various sights and cities around Cambridge, such a horse back riding and water bodies, on top of the traditional on-road type relay. The one in the second league of the relay in Cambridge is no exception either.

From the event at Parker’s piece the night before, on this Sunday morning, the flame will travel through the Great Court at Trinity College at about 6 am in a private appearance within the college grounds- pretty much out of bounds to the public, though event is viewable live from the BBC TV telecast. This run through Trinity is an enhancement to relive the famous Great Court Run featured in the 1981 film Chariots of Fire and recreated by Sebastian Coe and Steve Cram in 1988. Thereafter the torch departed in the morning rain from the college grounds at about 6.50am to the River cam by punt towards Magdelene Bridge north of the Trinity punts holding area. 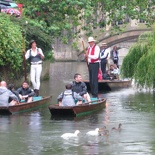 Flame on the punts 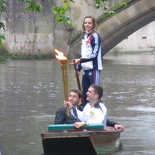 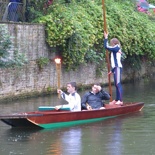 Mr Edward Roberts of Cambridge was selected to carry the flame on this part of the relay through the River cam, given appreciation of his volunteer and community work with Linkline, SexYOUality and the Cambridge and District Community Mediation Service.

A long convoy of vehicles sit awaiting over the Magdelene Bridge, with it’s sides all flanked by a cheery and sizable number of supporters despite the morning downpour. The vehicles here in question comprise of a combination of partner and sponsor party vehicles, with each presenting partner having a vehicle of their own in this convoy (such as the Samsung, Lloyd Tsb and Coca-Cola party buses), various media, camera/broadcasting vehicles as well as police/security and torch logistics support vehicles. The presenting partners at times will offer people lining the relay route gifts and keepsakes, these items often can be worn or waved to give extra movement and colour to the crowd as the Olympic Flame is carried by the relay route. 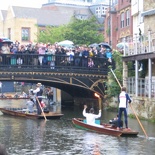 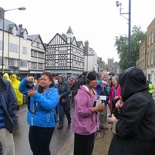 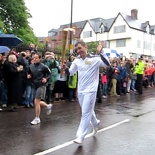 carrying on the relay!

The transition area from punt to road was small given the reasonably large crowd who turned up to catch the torch on the River Cam despite the rain- which didn’t seem to dampen anyone’s spirit. After crossing Magdelene Bridge, the punt part of the relay ends with a punt to road transition right on top of the bridge itself, where the torch is further carried out of Cambridge via St Ives and Huntingdon Road towards Luton.

Video of the whole Cambridge torch event and relay in a nutshell:

You can view gallery photos of the Olympic Torch Cambridge Punt Relay here. 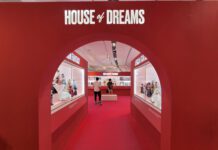 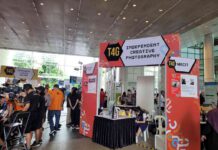