2011 turned out to be pretty much a snow-less year, with the Christmas period surprisingly devoid of any snow, considering how it usually comes in early December for the last 2 years. And before you can call it spring, it’s snowing in Cambridge today! Strangely, nearly 2 months later than usual. The weather here in the midlands UK had been rather eccentric with rather summer-like warm periods contrasted by sudden cold spells, much to the dismay of many students here who caught the cold chills and flus at the last minute. 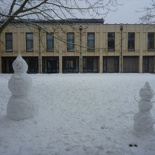 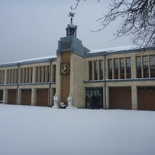 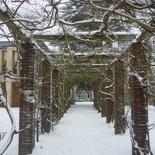 Then before you know it, came the unsuspecting white flop over this weekend. It snowed overnight, but the snow is not that deep as last years- sitting just under 5 inches- the kind which won’t humorously put the UK workforce in to a grinding halt, well at least the airports are still functioning, to some extent… By the looks of the weather reports, this may be the only snowfall we might probably get till next winter too.

With fresh snow, comes snow responsibilities as well. Ahoy! May all the snow mans, snow totems and snow fights begin!

(New record! Made a snowman myself in under 10 minutes flat. :3)