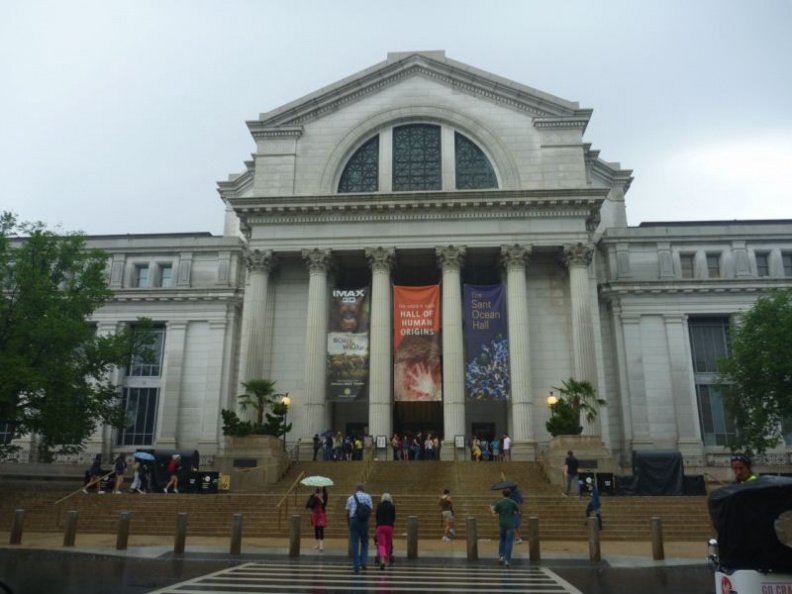 The National Museum of Natural History is a natural history museum administered by the Smithsonian Institution, located on the National Mall in Washington DC, United States. It opened in 1910 as was known back then as the United States National Museum to meet the growing needs of the Smithsonian Institution for additional exhibition space to house their collections, as well as supporting ongoing research in Washington itself. The main building we see today was not fully completed until 1911. It was designed with a neoclassical architectural style which was popular in France of that era by architects Hornblower & Marshall.

The museum’s grand lobby is home to an atrium spanning the full height of the museum with a full size adult African elephant display as a centerpiece. The lobby is the entrance to the first section of the Hall of Mammals. The Natural History museum sees about 8 million visitors annually and is open 364 days a year with free admission, though donations to the Smithsonian institution is greatly appreciated. The museum houses over 500 million different unique collections of plants and animals specimens, as well as various geological ones including fossils, minerals, rocks, meteorites. It is the most visited of all of the Smithsonian museums and is the research home ground to about 200 professional natural history scientists, forming the largest group of scientists dedicated to the study of natural and cultural history in the world.

The Hall of Mammals is a well, a hall of mammals! Every single iconic mammal since the ice age to the present is on display here, all taxidermy stuffed in realistic poses in their natural habitat settings. These various displays spans the gallery sides or hung from the ceilings. Various subgroups such as the marsupials are on display here too, educating visitors their natural way of life. Connecting the gallery is The Hall of Human Origins. This gallery covers much our whole evolutionary tree from the very beginning, including the sub divisions of the ape group where we largely evolved from.

The human gallery pretty much establishes ourselves as learning creatures which fueled our evolutionary development of intelligence through the use of understanding the world around us. This is of course implemented with the clever use of tools to change our environment suiting our needs. We humans are also a rather populous and predatory bunch to begin with too, touching on the challenges of our exponentially increasing population and the diversity which comes with it.

The Ocean Hall is a newly renovated gallery in the museum and connects many of these sub galleries together. You will often find your way back here after exploring another sub gallery or two. The Ocean hall here is one of the few bigger galleries in the museum with various sea-related exhibits. It not only touches on the various sea marine life, but the different tools and equipment used by explorers now to explore the vast deeps of the oceans we until today have not fully comprehend or explored. The hall is home to about 674 different marine specimens and equipment, including a huge bony jaws display of a great white, preserved giant squids, fishes of the deep and crustaceans. Suspended from the roof of the gallery is a North Atlantic Right Whale.

Just off a quiet spot from the Ocean hall is the African Voices gallery. The exhibits showcase the life and living ways of the Africa’s people, covering their cultures over time in the realms of family, work, community, and the natural environment.

Going back in time, the mammal section transitions to a display of Ungulates, particularly those of the early ice age before transitioning to pre-mammal portions and eventually The Dinosaur Hall which is too combined with the hall of Paleobiology. Here resides many different prehistoric creatures, not only those which roamed the earth, but those which swam in our oceans as well. The Dinosaur hall features a mix of fossilized skeletons as well as full-scale cast models, including Tyrannosaurus Rex facing off with a Triceratops. Other dinosaurs here include an Allosaurus, a Diplodocus and Stegosaurus.

Just above the dinosaur hall is The Hall of Geology, Gems, and Minerals, which is served by an overhead walkway leading above the Dino Gallery. The displays here houses an assortment of rare and semi precious stones, as well as minerals and ore. It is also home to the Hope diamond, which was seemingly a rather popular centerpiece with the museum visitors. The Korean Gallery is a special showcase, celebrating Korean traditions and examining its unique influences the country play on the world today. The Smithsonian ceramics collection compliments the gallery here too, with a rich selection of photographs, ritual objects and traditional Korean carpentry.

so MANY STONES!
feeling spacey?
night at the museum!

And when you are thought you are done with stones, there are even more stones, here, there everywhere, particularly in the cave sections of the museum. There are some really expensive looking gems as well as few large impressive crystals taking a scene right off a cavern. The formation of rock and ore are also taught here. It’s not soon after where the galleries shifts it’s focus from earth based stones to the extraterrestrial ones, comprising of meteoroids, asteroids as well as specimens from the Mars and Moon. It’s here too where you can have a go at touching a rock from space. The space section not only covers the geology of space stones but also the various equipment and process employed to harvest, store and transport them in various space missions.

The Insect Zoo is one of the few lesser exhibits here with not many displays, with the exception of just a few small sections housing leaf insects, children play displays and enclosures containing arachnids including tarantulas and scorpions. Notably this is the only section where live exhibits reside, therefore the name “Zoo”. The highlight of the Zoo is the large climate controlled live butterfly pavilion, but is accessible only via tickets obtainable by a payable extra at the attraction entrance. The tarantula section is really cool though, always wanted one for a pet.

It’s all about bones in the galleries which follows, the Osteology section in the Hall of Bones houses skeletons of various marine and land animals. No fish bones about it, there is even an impressive giant sea turtle skeleton on display too.

no bones about it
forensics
Ocean gallery overview

The Osteology and forensics section of the museum covers everything we can learn about human remains, there is even a mini teaching forensics lab here to educate visitors on tricks of the trade, far beyond what CSI can teach. Showcased here are also the early days of medicine and tells the story of various popular forensic cases of the dead telling tales.

Modern forensic sciences now greatly put the phrase “dead man tell no tales” literally to the grave, besides the phase itself being glorified in contemporary television series, such as the CSI episodes. The galleries teaches how the truth can be unraveled from excavated remains of the dead, painting the life of the victims just before death just not only based off their composition and state, but by the way their bones are arranged prior to death. This includes the presence of any trauma and marks to the skeleton as a whole, which could signify injury or torture. There are several tortured souls on display here, each with their own grisly tale, repainting a picture of their last moments of the person’s life. Interesting exhibits here also includes an early day doctor’s toolkit, which bares an uncanny resemble to torture kits complete with amputating saws and bone breakers.

Part of the gallery here is devoted to long time anthropology researcher Dr Grover Krantz and his dog Clyde, with their skeletons poised in the Partners In Evolution display for eternity.

The bird collection is one of the last galleries left in the building to cover and is tucked into a dark dead end corner of the museum’s basement, which seem rather out of place for the large impressive displays which line the walls of the bird alley. Most people usually come in here via a walkabout, by accident or just simply looking for a toilet here or so, not doing much justice to this little gem hidden in this corner of the museum. Here you have an assortment of various American and migratory birds of the region, with some bearing somewhat a similar resemblance to birds of the Angry kind.

In all, the Washington Smithsonian Natural History Museum is a nice museum to spend an afternoon in, you can cover most if not all the galleries under 2-3 hours, with time to spare on other Smithsonian museums such as the Air and Space also located not too far from here along the National Mall.

Though the galleries here are not as fantastic as the American Natural history museum in New York, it’s still a spectacle considering that it is firstly a research museum and one that actually does not charge an entrance fee to visit. It gets my recommendation as a must visit here in Washington.