Home Travel Americas On the Alcatraz (The Rock) 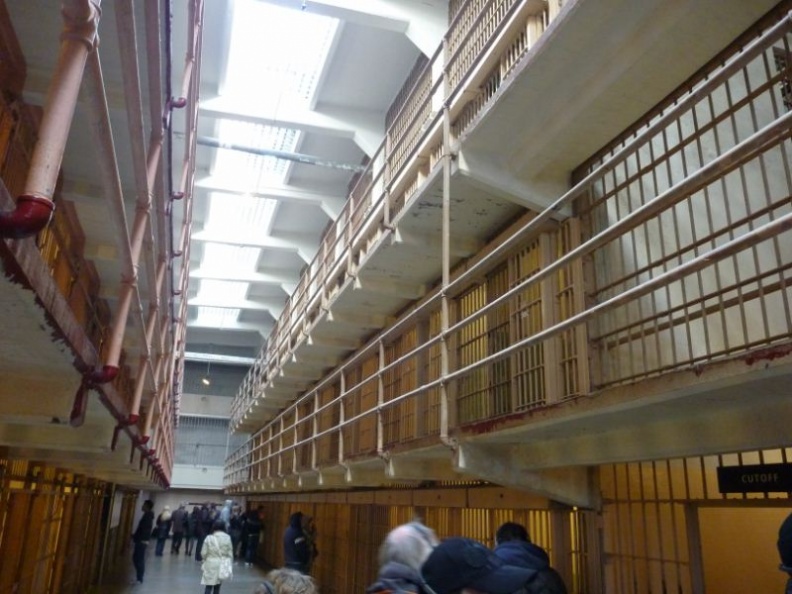 You should be no stranger to the “The Rock”, with the island being featured in many movies, TV shows, cartoons, books, comics, and video games alike. Located in the San Francisco Bay, The Rock (Alcatraz) is an island about 2.4 km from the shores of downtown San Francisco, California. It was a maximum security prison, a military fortification and prison, together as a federal prison for the Federal Bureau of Prisons until 1963. The island is mainly a tourist attraction now and a National Historic Landmark from 1986. You can catch ferries off Pier 41 to the island, as operated by Alcatraz cruises. They are the main operator for the Hybrid propulsion ferries serving the island and for a $26 online booking, you get a return ferry ride there including entrance to the prison and tours included.

You can get to Pier 41 via the Embarcadero or take the Muni trolley called F- Market & Wharves and stop by the warehouses piers by the Coit Tower, you can’t miss the hangar-sized pier-side warehouses where the Alcatraz cruises reside, when in doubt just ask to trolley operator for the nearest stop to Pier 41. The journey across the San Francisco bay to the island will take you about 15-20 minutes, starting off the eastern side of the bay pier areas before heading northwards toward the island. The cruise will offer nice views of the San Francisco skyline from the bay, with several iconic landmarks such as the bay and Golden Gate Bridge in the distance.

The small island was developed with facilities for the prison, army barracks and a lighthouse until 1963. Today the remains of all the remains are the main prison building and some ruins of the administrative section which was destroyed by the great fire. Upon landing on the island, you will be greeted by the island’s main visitor center which houses the attraction bookshop built into an old army barracks. Much of the signages are preserved here too, including one welcoming the Indians. The island was occupied for more than 19 months by a group of American Indians from San Francisco from November 1969. This was part of a wave of Indian activism across the nation, with public protests through the 1970s. It was thereafter in 1972, where Alcatraz became a national recreation area and a tourist spot in the bay area.

Welcome Indians!
Our guide for the day!
The now-abandoned prison

As with most parks operated by the National Park Services, it is run by public volunteers. Many volunteers from the national parks spend their time here bringing guests around the island, telling the stories of the island as passed from generations. These volunteers are usually retirees who find great passion about the Rock and are very knowledgeable about the island they are on, some even being guides for over 10 years. The guided tour here begins at the arrival area, with each guide taking turns to entertain each ferry load of visitors. Map parks are available at spots around the island by donation, recommend “retail price”, $2. The guided tour is an outdoor one, complete with introduction, history lessons and pop quizzes alike. We passed by several destroyed buildings such as the social hall by the ocean side hill walks, these were destroyed by fire during the Native American occupation.

The guides will bring you along the broadwalk until you come to the main prison building, where you embark on the 2nd part of the tour inside the main prison building on your own. Here, you will enter the prison shower and changing areas, which is now a queue line and assembly area before entering the internal secure grounds of the prison itself. Here you will be handed a pair of headphones and a narrated audio guide for the audio tour sections inside. Good thing these guides come complimentary with the ferry tickets and is not an optional payable extra.

The audio guide itself is well narrated. It guides you on the path to take within the prison grounds, telling you the key areas and the happenings at each corner of the prison. Architecturally-wise, you may find the multi-tier prison walkways here a recognizable famous icon used in my movies as well as computer games which their designs are based loosely upon. Some parts of the audio guide is narrated by previous inmates and wardens of the prison themselves, allowing you to get a first hand experience of the tough life on the rock from both sides. Just like most attraction audio guides, they are digital MP3 players which allow you to rewind, forward or pause as you make your make to the next attraction on the recording.

life on the rock
Catching some sun
San Francisco

The guide brings you to various aspects of the Alcatraz prison life, like how inmates spend their time in the cells, recreation in the prison library, to the large recreational areas where exercise and games are played, complete with their own wide courts and hardened concrete spectator stands. It’s here too on the outdoor where you can enjoy scenic views of the city of San Francisco itself. So near yet so far.

City of San Francisco from the Alcatraz island

The tour also covers many infamous escapes attempted, particular the one by Frank Morris and the Anglin brothers on June 11, 1962, where Frank Morris, John Anglin and Clarence Anglin carried out one of the most well planned and intricate escapes ever devised on a maximum security prison- by escaping to the roof behind the prisoners’ cells in Cell Block B and pedaling a raft across the bay to safety. The 3 are missing presumed dead, though many have a hunch that they made it are still free men till today. Notable too was the tragic Battle of Alcatraz, which was a full-scale riot May 2–4 in 1946, with inmates seizing the prison, the gun cage and killing many prison guards while trying to escape, though they didn’t get off the island either and were later overwhelmed by swat teams.

The prison from the courtyard
Solitary confinement
get me out

Further part of the tour will bring you to the infamous solitary confinement cells, where only the nastiest of hardened criminals get to go behind these double doors without seeing any light of the day. These cells are served by a primary layer cell, a second gate and finally, a covering door which seals out all form of daylight to the cell. So much for being in Jail!

Nice cells
The door to freedom
Out the admin building

The audio guide ends leaves you at the administrative buildings, where you can take your time in exploring. You can check out the visitor waiting areas, inmates meeting and visitation booths, as well as the warden’s office (including the one outdoor which was destroyed in the great fire) and prison control center. Access to these displays here allow you to have a peek into the daily lives and dangers of a typical prison warden here. Here also lies the main prison’s “door to freedom” where freed inmates finally go through before stepping out of the island as a free person, a sight many on the island would love to savor. Photos of notable wardens in charge of the prison and old uniforms of the yesteryear are also on display here.

lets head back to jail
the ktichens
main parade square

Located separate from the administrative and cell blocks are the prison kitchens. These are large prison eating places which are said to be one of the most tense and dangerous places in the prison, with all inmate gangs coming together to eat, complete with cutlery which can be used as potential weapons against anybody. Even the knives in the kitchen have to be accounted for after each meal. Just outside the administrative block and the windows here are vast open spaces overlooking the south eastern side of the island.

This vantage point is home to the old prison lighthouse which is the oldest light station on the U.S. West Coast. What remains today of the lighthouse is is the tall cement tower equipped with a modern beacon. It stood the test of time and abuse for over 50 years, surviving prison breakouts, riots, burning and is the only remaining building after the 1970 fire destroyed the adjacent warden’s house, keepers’ quarters as well as other buildings on the island.

no one makes it out!
cliffhanger!
the rock

The outdoor areas of the island are home to a small nursery and farming area, presumed to be small areas cultivated by the inmates during the time. Here you can grasp the large open spaces which form most of the gathering areas for the inmates as well as a large parade sqaure to boot, which possibly served the army barracks during it’s active days. The Rock is surrounded by many ravines and steep cliffs which dots it’s perimeter complete with the strong smashing tides of the Pacific, no wonder no one ever tries or even make it out alive from here.

The sight of the the prison from the lower grounds is a sight to behold itself. The end of the cliff side walk will bring you back to the island dockside and attraction bookstore where you can catch your return departing ferry back every half and hour.

Well, that’s all for my day in jail, cheers and take care!

Next Page: Back to home »
City of San Francisco: January 2011