The iMech Greenpower race (25th April 2010) is an annual eco-race organised by the institution of mechanical engineers (iMechE) in conjunction with secondary schools, colleges and manufacturers to introduce and promote the engineering profession to students in the UK. This blog entry covers much in a nutshell what my team of 4 did to prepare ourselves for the national race, which included building an electric race car from scratch and pitting it again other schools and colleges to a grueling 4 hour all electric race on the Goodwood racetrack to the finish. This was done during my first year in university as a freshman.

The event is supported by companies such as Siemens, Ford, Prodrive and Sembcorp just to name afew, the program aims to advance education in the subjects of sustainable engineering and technology to young people.

Greenpower is dedicated to promoting engineering and technology as careers to students aged 9-25 in any form of full or part-time education. This is achieved through unique hands-on projects to design, build and race an electric car.

Not only does Greenpower approach the idea of engineering from a less mainstream direction than normal lessons or after school clubs, it also encourages creativity and most importantly enthusiasm and cooperation in problem solving: invaluable skills for any young person whether they decide to pursue an engineering career or not, and one thing’s for sure, being in a Greenpower team is an experience that its members never forget.

Building the car
The thought of participating in the competition under representation of Cambridge university eco-racing club, their most prominent creations being Infinity and Endeavor solar cars which competed in the world solar challenge in Australia last year. This Greenpower race is a subset of the eco-racing events we all participate in. 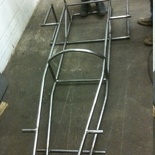 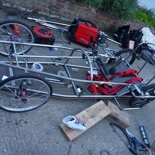 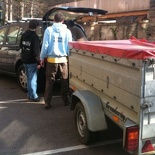 Loaded and ready to go

The car was first conceived through in campus discussions near the start of term, mainly through pen and paper talks over coffee or planned meetings by our workstations, where the final plans are put on CAD model and evaluated before putting the solid plans down for the planned final build.

We were fortunate to have Jan from Tag-on, a friend our team manager got us in contact with. He had participated in the Greenpower race for many years before, with lots of experience on the races behind him. He serves much as a technical consultant in my team’s build with his engineering and technical expertise, as well as sponsoring supplies, tools and providing a sizable and equipped workshop for us to work in.

We started off with purchased tubular steel tubes where they are all marked, band-sawed and bent to shape and size to form the whole steel chassis and roll cage. Thereafter the sub assemblies such as the drive train, steering mechanism and brakes are individually custom fabricated with off-the-shelf parts are bolted onto the main chassis. The steering column was interesting as we planned on an anti-Ackerman design with reasonable camber and caster angles for less over steer on the corners. We employed a composite home made carbon fiber body shell laid over painstalking made foam molds for the body work. 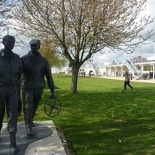 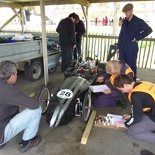 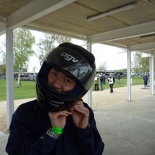 Shaun’s not the Stig!

Jan is a nice guy, to the extent of allowing us to work on the car in his home yard over the weekend and providing transport back to Cambridge (when we work too late and miss the last hour-long bus ride home) as well. The lunch treats prepared by his wife were always something to look forward to after a whole long day of fabrication. Did I mention he have 2 nice dogs (a lad and a collie) as well?

We entered the Greenpower race as a corporate challenger, on the same line as the manufacturer teams such as Jaguar land rover. The car build took approximately 100 man hours of work, it was completed in time for the race on 25th April 2010 and transported via trailer to the Goodwood track early on race day for the afternoon race.

The race
There where about 30 teams who participated in our race event. There were the favorites, veterans, defending champions as well as rookie newcomers like us. To us the race was all completely new to us, particularly the experience to plan and manage a racing team with team strategies, pit stops and driver changes, it was literally almost racing poetry in motion. The best part is that it’s all pure fun for a motorhead like me. 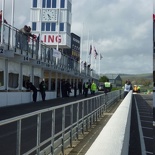 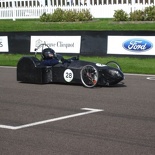 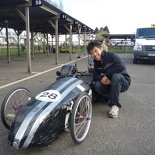 We got through the pre-race scrutineering in time on race day for a picture perfect flag off and race. We started the race with a 3 driver strategy with one battery swap (refuel) in mid point of the 4 hour race. Our build mate, Fred got to go first at the starting grid, followed by myself and Jan finishing the third of the driver shift for the checkered flag.

Our car broke down a few times, but it’s quite a fighter with our quick MacGyver slap on fixes which got it back in running in no time. It finally succumbed after 3 hours of continuous running when the motor burned out on Jan’s stint where he pushed the motor for overtaking.

We didn’t expect to win, but to let this participation be an eye-opener and to gain as much experience for next’s year’s race- where we have a better understanding of the race functions. There were limitations too in this first race too, considering the lack of time and a rush job to actually have any final finishings for the car. There are lessons to learn for many too, especially for most students in the team not street smart with technical or practical expertise and only armed with theoretical knowledge of the A levels- what you learn in the text books will not always apply and work in real situations. And I am glad my path in the Singapore Polytechnic served me greatly- simplicity is the key! But it all went better than expected, anyway, it could had been worse.

It was my first time racing at Goodwood too and I can say, it’s not a bad race after all.

View more photos of the racing weekend trip in the Greenpower photo album.