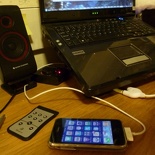 And so as told by the Wall Street Journal (WSJ). Soon after the news broke, we were informed that the next-generation iPhone would be announced on June 22nd (a Tuesday, naturally) and would be dubbed the iPhone HD (a name that has been tossed around before). That certainly makes sense given that Apple almost certainly has to up the pixel count in order to rival the EVO 4G, HD2 and all of those other high-res handsets, but we’re still reserving judgment until we see that fateful media invite hit our inbox.

There had been speculation of the phone spotting a 5 Megapixel camera as well, (a much needed improvement considering how bad the current 3.2MP camera is) given a large mysterious order for 5MP CMOS to a Chinese firm last year. The form factor will still remain largely the same, candy bar with a non-removable battery body. The only difference is just a bigger camera hole at the rear and a discreet video conferencing camera at the front near the earpiece, so as the pictured by the release of the 4th Gen internal housing shells by Chinese OEM mobile parts maker as few months back, where production could have already started.

WSJ’s John Gruber also weighed in with some more tidbits, in his characteristically polite way. Gruber says the next model will have an A4-class SoC, a 960 x 640 display, a front-facing camera, and that iPhone OS 4.0 will enable third-party multitasking. A pretty safe set of predictions, in all, but Gruber’s done pretty well in the past, so we’ll just have to wait and see.