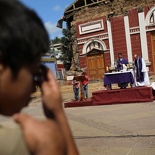 It was devastating, nine days after an 8.8-magnitude earthquake killed hundreds of people in south-central Chile, relief efforts were beginning to reach those in need, rescue missions became recovery missions, and rebuilding is already under way. In the days since the February 27th quake, nearly 150 aftershocks have been recorded, including thirteen above magnitude 6.0.

Despite the rush of humanitarian aid to all affected areas, the government has been criticized by Chileans, who say the response was slow and inefficient. One recent government action was to grant a short amnesty to looters before sending troops out in search of stolen goods. Nearly $2 million worth of looted items were returned, often dumped on roadsides, by Sunday.

Collected here are photographs from the past week in quake-affected Chile.