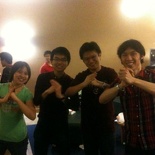 Welcome the year of the tiger! A whole new year on the lunar calendar. There had been much talk among the Chinese group here in Cambridge with regards to the new year, particularly how it is celebrated in various countries, with experiences of their own, let be in China or Malaysia.

Things here in the UK are very different from what it will be at home- No fancy Chinese new year lighting, blaring music from homeland shops, the endless looping of Chinese new year songs in most public areas, let be departmental stores. Things here are just as it is of a normal work day, not a single piece of decoration on the streets and bummer it’s not a holiday too. Angbaos were literally non-existent.

Though most Chinese new year festive and event lineups can be found in most Chinese cultural clubs in the university, there was an obvious lacking of the fun and joy of Chinese new year we all grew up with anticipating every year back home. The main sizable celebrations closest to us will be the Chinese new year celebrations in London itself- to our dismay an event held smacked right in the middle of our school term, so we can’t do anything much about it. There are of course some exceptional few I was told about from China who literally flew back home just for 3 days so they can have reunion dinner, that’s crazy but I dwell more about that.

Personally I did not have any festive plans lined up over the Chinese new year weekend, with only plans to attend a Chinese new year formal (dinner) in college on the Friday (12th) before Chinese new year. Planned for the actual day with be only a video conference (virtual pai-nian) with my family, wishing them a happy new year and calling it done by rewarding myself with a good home cooked meal in the evening. Little do I know things won’t go quite as intended.

College CNY formal (Fri)
The formal hall I planned on going was quite a bunch. And I am glad my college did have Chinese new year specific plans and a Chinese menu for that day as well and man was the turnout exceptional as well- full house! We had a 6 course meal with appetizers, Peking duck, chow mien (fried noodles) and bean sprout vegetable mix. Though much attempt had been tried to make the dishes as authentic as possible, it still does not taste as good as the ones prepared by Chinese chefs back home. Desserts, coffee and fruits followed after. Free flow of Wine, Champagne and port (dessert wine) was served as well.

Queen’s reunion dinner (Sat)
Just few days before the weekend. I received an invite to an engineer’s reunion dinner on that following Saturday from a fellow 1st year course mate in Queen’s college. Apparently we will be having a steamboat style dinner with all the year one Engineers as well as some 2nd year Singaporean lawyers. The setup was simple: 4 rice cookers (which doubled up as boilers for the steamboat), a spread of food for about 10 persons and lots of Chinese new year songs from a laptop courtesy of Youtube. It was a rather fun informal steamboat dinner all huddled and eating from our temporary “floor table” in the host’s dorm room, which was remarkably large and able to hold over 10 guests with ease. The dinner was simple, but served it’s purpose well as a reunion dinner and I say, a rather proper one. 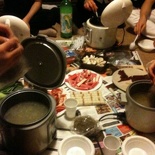 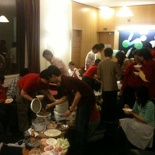 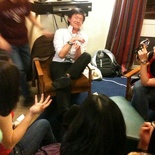 CUMAS Steamboat Dinner (Sun)
Just when I thought 2 events were enough. This 3rd event was held on the actual day (14th) of Chinese new year itself at Pembroke college. I got to attend the event courtesy of my roommate who unexpectedly offered me an invite to the event just few days beforehand. He is a committee member of the Cambridge Uni Malaysian society (CUMAS). There was another small Singaporean cookout which I could not attend as I’ve already RSVP to the latter. I was not disappointed as well- this event was much bigger than the one I went the day before, not to mention with a larger variety of foods and larger turn up as well (about 30 odd people). The food spread was commendably good and comparable to that of commercial steamboat joints. Did we had such a good time, a Chinese new year’s day dinner (aka V day as well) worthy for the occasion itself.

There were yum-sengs and lots of chatter with new friends. With the exception of the absence of yu-sheng not only in this event, but in the other 2 events too, apparently this is something only unique to Singapore and Malaysia. Oh yes then there was the feat of sobering up a few after the event as well.

Seems that my Chinese new year weekend turned out rather more eventful than I initially expected! And I have largely my fellow course and room mates to thank for a fantastic Chinese new year lineup to user in the year of the tigger!