Home Technology Gadgets Apple iPad annouced, not a workhorse, but hey it can run iPhone... 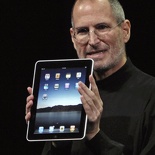 It interesting that such﻿ technology and capability already existed ages ago, but no one seemed to put it all together for the consumer. Apple seem to always get that right, this time they are doing it again with a new slate tablet computer called the iPad.

At first glance, it looks like an over sized iPhone, which the distinctive bezel, form factor and home button. It’s not running the full workstation-capable version of OS 10 contrary to much speculation, but rather a portable-enhanced version of OS 10 which is largely similar to the interface on the iPhone, for a larger screen. It comes in 2 favors, Wi-Fi or one with additional 3G in 16GB, 32GB, or 64GB capacities on flash drives.

The fun device seems to cater for a void in the market which tries to be neither on both ends, namely a phone nor a work-capable computer. If you need an, it will only truly shine for it’s wireless capabilities and size, so it will be wise to get the one with 3G. Otherwise, it will just be a regular slate with no noticeable selling points. To me, the iPad seem to fit into the market for people looking to have a device around the house for quick access to emails and the internet, but not much one being a full-fledged computer, something which might rival the iMac or iBook. So technically it’s in a class of it’s own filling the void between the iPhone and the iMacs.

Though multi-touch may be a selling point, capacitive touch screens are good for gesture based commands and navigating menus. Not exactly that impressive for writing, something a tablet must be good at. Capacitive touch screens are just simply something notorious for precision. Moreover, I don’t see a need for a slate, being a tablet user myself for almost 5 years, having used on screen digitizers (wacom penabled screens) on convertible slates as well as traditional pen based drawing tablets (intuos4) from wacom, I find the lack of precision of the screen a big turn down for a promising product- It is just not as practical as I’ve expected it to be too. In short, the precision offered on dedicated tablets is very important and is something I don’t see the iPad fitting well into my needs as a student who needs to use a tablet for lectures as a student, let be precise enough to take down notes or do drawings accurately on.

The iPad is after all, a fun product not intended for work. Like, the iPod touch bigger brother. An expensive toy.

Hardware-wise, it does bags 10 hours of battery life. But big no nos will be the lack of a user-replaceable battery and a small resolution XGA screen- You can’t really call the slate an internet machine with a screen resolution of 1024×768! The 1Ghz A4 processor of the iPad is adequate, despite not being as speedy as most mainstream tablets on the market now. This apple designed processor is largely tailored to the basic needs of the device and OS, thus would be adequate for the basic functions it aims to serve, don’t expect it to be much of a production computer though.

The really cool thing I like about it is that it can run literally all iPhone apps on it out of the box, so that will allow many users to port over from existing iPhone platform and also establishing a good base for the new product to grow on.

I can’t deny that the device is indeed very pretty, but it will never be powerful enough to be justifiable to do descent work as a proper computer or for school, etc, yet too big to conveniently carry around as a portable device. It’s trying to be something, but not really found it yet. Anyway, with apple aggressively promoting the iPad SDK since it’s launch, it will be fair however to give it some time for iPad dedicated apps to grow on it where it’s functionalities can be truly realized. But for now, and for me, I will be putting my money for the next gen iPhone maybe coming out in June, that will be a better choice.